The Changing Face Of The Drew Peterson Legal Team 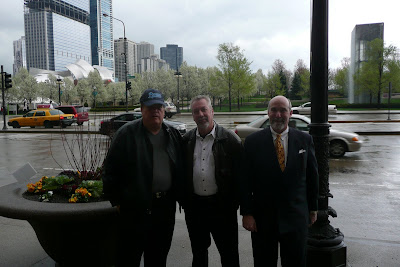 Click on picture to enlarge. (Who is that guy with the Berlin cap?)

Joliet, IL—Charged with the murder of his third wife, Drew Peterson is in uncharted legal territory. The Drew Peterson Law crafted by the Illinois Legislature specifically to allow hearsay evidence has complicated this case that lacks any real hard evidence. I expect endless appeals to haunt the proceedings because hearsay evidence was barred by the Bill of Rights. We may have to hear from the United States Supreme court to learn if hearsay will be accepted in our courts.

Chicago lawyer Joel Brodsky is still at the helm of the Peterson defense but as of right now he's being joined by the venerable criminal lawyer, Joe Lopez. Lopez was prominent in the Chicago Family Secrets Trial and has a great reputation among his peers.

Lopez is no stranger to the Peterson case having argued it in a mock trial at the IIT Kent College of Law sponsored by WGN radio. I personally was there to see that even which ended in a hung jury that split 50-50 for acquittal. Peterson seems to be in good hands.

He may have done it, but he's definitely not guilty beyond a reasonable doubt.

It's going to be an uphill battle in Will County, however. Lots of pro-prosecution bias by judges and potential jurors.

Where is this case at??Did I read your post correctly CF,jury came back hung??