Is Crimefile News Guilty Of Sedition? 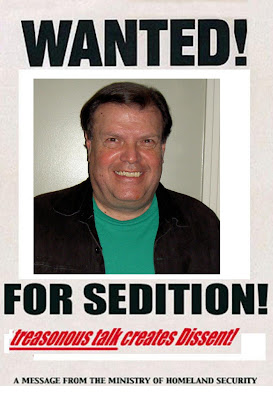 Time Magazine’s Joe Klein and New York
Magazine's John Heilemann would hold a show trial and hang me along along some great company, Glen Beck, Rush Limbaugh and Sarah Palin.

Klein threw down his anti-sedition gauntlet on the MSNBC Leftist Chris Matthew’s Show on Sunday. Heilemann was in full agreement.

Klein offered a definition of sedition which is conduct or language inciting rebellion against the authority of the state. Sedition is of course a serious felony crime.

Klein forgot just one little item and that is the state’s officials get their authority from the United States constitution. If our officials elected or not try to govern outside of this inconvenient document, the Constitution itself legitimizes and legalizes rebellion.

Everyone must remember it’s always the winners of these conflicts that hang the losers and they also get to write the history books. This country was not founded by a bunch of limp wristed cowards that failed to zealously protect freedom and liberty.

There are plenty of well armed, real Americans that would jump at the chance of waging full scale war on any American politicians tampering with the Constitution and freedom.

To Klein and Heilemann, Please add this middle-aged, freedom loving, White man to your sedition list.

It is indeed threats like this from the Bolsheviks that will guarantee another civil war in America. America’s military and police are taking side everyday and only a tiny minority support the Socialists.

Our founders designed this country to operate on a principal that the government fear its citizens rather than the other way around. As they trample the rights of Americans these despots will need much larger armies of bodyguards.

Klein and Heilemann are just infected with the disease called liberalism and couldn't tell the truth or know reality if it smacked them right in the face. I didn't hear any talk of sedition during the heated environment in which the Left protested the wars under Bush. Wasn't that against our government?

These people are such a joke, it is really hard to take them seriously anymore.

You are not allowed to speak against the chocolate jesus and the "progressives".To do so is now sedition.

I'll see all you Patriots on the Lexington Green.

Folks this is not about Repulican vs. Democrat and we need to stop this war between the two. This is about Progressives (socialists/Marxists/communists) versus our Free Republic.

Heilemann said, "I agree with Klein on Sedition because Rush Limbaugh refers to the Obama administration as a 'regime". Well Mr. Heilmann, do you know how many times CNN, Chris Mathews, and even yourself refered to the Bush administration as a "regime"? Many, many. Be careful Paul. These morons are just trying to insight a fight. They want the TeaParty's and the conservatives to resort to violence or racial name calling. Then they have their ammo in trying to portray good Americans as racists and haters. We need to continute to calmly tell the truth and it will prevail. I heard a good line tonight,