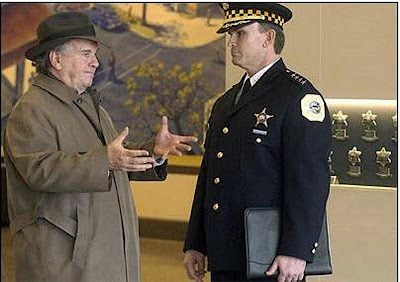 Chicago, IL—Jody Weis was never cut out to be the Chicago Police Superintendent; he was never properly trained or equipped for the job. At least the job he thought he was filling.

Weis was a civilian and should have never tried to be a cop. For Weis putting on the gun, star and uniform was something of an impersonation. He’d never done that before and that was no small part of his downfall.

Weis was with the FBI. The FBI does have police powers but they are never first responders to the mayhem of large violent cities. The FBI investigates federal crimes and they search for certain federal fugitives. The FBI mission has little to do with police work and making the transition from what they do to what big city street cops do is huge.

Weiss somehow thought he could simply put on the uniform and parade around like a real policeman. Unlike FBI agents, Chicago cops learn to experience fear early in their careers. Imagine being a young White cop handling routine ghetto calls on the midnights.

The radio assigns you to handle a simple traffic accident and as you try to arrive quietly there is a dispute between the drivers and the inhabitants of the nearby buildings empty out in the street surrounding you. You are the only White face in the sea of hundreds and none of them are fond of the police.

You have no choice but to never let the crowd smell your fear, while putting on your best game face. You write your report, cite the driver at fault and go on to the next job. Either you can cut it or not. Only special people can learn to deal with that kind of work environment.

Weis should have taken the job as a civilian and stayed out of the neighborhoods except to attend funerals or parades. Sticking to administrative duties may have allowed him to survive. A dignified business suit instead of the super-hero, top-cop garb would have saved him from a lot of pain.

The last civilian superintendent was the late, O.W. Wilson. Wilson was an educator and criminologist who served for a while as an Alameda County Deputy Sheriff early in life. Wilson was one of the better superintendents.

Under Wilson nobody was hired or promoted without demonstrating their ability and skill through a civil Service test. Either you demonstrated that you were properly educated and capable or you did not get the job.

Wilson never came off as a pretender, but he did bring reform, better training and equipment to the rank and file. In three short years the police pay was more than doubled. He redesigned and greatly improved the police communications system. He brought police professionalism and before he left he separated the real police from similarly dressed security guards with the trademark checkerboard field cap.

Through the dictates of minority leaders, politicians and fools all hiring and promotions are now purely subjective choices. Uniquely unqualified imbeciles and jerks were appointed, put in charge and the Civil Service system was retired. This was the recipe for disaster.

I got a question from a long time reporter friend asking me what Phil Cline would have done had he been out at a similar press conference as Weis was Friday. That was a great question. Phil Cline was hardly a great police administrator but first and foremost he was a real cop. As fat, as Cline was he’d have waddled over to the scene with gun in hand and never left until his fellow officers and the bystanders were safe.

Jody Weis ran because he thought nobody would notice. Weis was dead wrong. Weis was caught and publically disgraced. Weis ill never recover from the permanent coward’s stain and should leave while he can still enjoy his pension checks before things get worse.

Chicago’s law enforcement will be ineffective and dangerous until there is a police superintendent given the real power to reform the department. A fair Civil Service system must be restored and along with adequate manpower and equipment must be provided.

Police need to be taken off of tax collection duty and placed in their rightful position as guardians protecting and serving the law-abiding.

Reasonable self-defense rights need to be restored to law-abiding Chicagoans and the unintended protection of thugs, rapists and killers must end. That means the rights of the law-abiding to keep and yes, carry guns must be returned.

These things will never happen under the corrupt Daley/Burke crime Families and Chicago’s current Aldermen.
Posted by Paul Huebl Crimefile News at 4/06/2010 09:34:00 PM

Another home run... Great writing Paul. And as always your right on the money.

As a member of Chicagos gay comunity I want to say that I have a huge crush on Mr. Weise. Beat me baby and abuse me I can take it!
Rodney

Excellent article, explains perfectly the difference between the "Real" Police and the pseudo-cops the FBI agents are.

The corrupt, politically correct, and inept administration has just about completely destroyed a once top notch police dept.

I retired 10 years ago and thought when I left the dept. was at rock bottom, but these hacks have managed to drill about a mile underneath whale shit to even lower depths.

I moved to Arizona after retiring, the wisest move I ever made in my life, great weather, freedom and low taxes!

Well done sir! We will lift a short pour of cask-strength VERY small-batch bourbon as a salute to you for this article... After a hearty lunch of course!