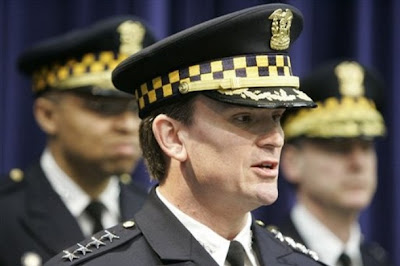 Chicago, IL—With impossible to defend allegations of cowardice, a nearly total lack of support by Chicago’s finest and the department in a management quagmire Jody Weis has little choice but to move on.

Since the cowardice allegation backed by solid videotape surfaced last Friday Weis has been in hiding. He’s not returning reporter’s calls, and has absented himself from meetings.

Weis is at the end of his three-year contract and his rope. There’s no way Weis can ever recover the respect of the rank and file officers. The leadership void is at crisis level as what looks to be a violent summer approaches.

I expect a resignation announcement at any moment.

As for Mayor Richard M. Daley he must quickly find a new superintendent that can somehow end the chaos within the department. Daley needs to pull out the stops to deal with manpower, equipment and contract issues. I can’t imagine Daley rehabilitating his act now. The City council is loaded with thugs, thieves and liars that need to be investigated, removed and imprisoned.

The victims of the mess will be the few taxpayers left that have seen their investments in the city evaporate. Even sadder will be the increase in property crimes and violence fueled by among other things wholesale prisoner releases and massive unemployment. As businesses suffer they will begin to lay of what’s left of their help and shut down altogether.

In a way Jody Weis will be lucky to have left the sinking ship. The new superintendent will inherit a disaster.

The famous, “I gotta run!”video

I think Jody Weis will just lay low till his contract expires. This way his work record is clean and he can move on. I personally would like to see Daley can his ass but I doubt that would ever happen.