Why We Will Have War In America 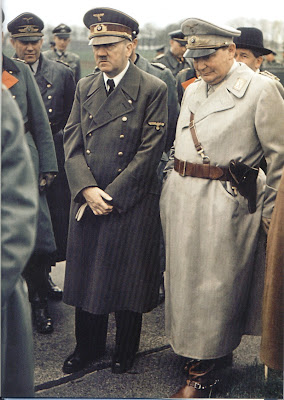 Washington, DC—Right now a group of man and women are locked in a conspiracy to confiscate property from and enslave their fellow Americans. This is nothing unusual for politicians anywhere. It is quite normal.

The Nazi Reichsmarschall, Hermann Goring once talked about war this way: “Naturally the common people don't want war; neither in Russia, nor in England, nor in America, nor in Germany. That is understood. But after all, it is the leaders of the country who determine policy, and it is always a simple matter to drag the people along, whether it is a democracy, or a fascist dictatorship, or a parliament, or a communist dictatorship. Voice or no voice, the people can always be brought to the bidding of the leaders. That is easy. All you have to do is to tell them they are being attacked, and denounce the pacifists for lack of patriotism and exposing the country to danger. It works the same in any country.”

Politicians are the control freaks and warmongers of the world. They campaign with one kind face and at the right moment of opportunity they reveal another face. The truth is evasive and controlled by public relations experts. Americans have been poor judges of character as they have elected lousy leaders for far too long.

It was the ingenious use of the new medium of radio that gave Roosevelt, Stalin and Hitler celebrity status and credibility they did not deserve. Effective speakers can put people into a cult/leader relationship and gain their undying loyalty.

Hitler’s Third Reich is the easiest government to study because that regime is both recent and the subject of end endless supply of books, films and articles. The participants of that rogue government documented each and every move they made. We never had to guess how things happened inside their reign.

The noble concept of the Nuremberg War Crimes Trial (1945-46) was to elevate the immoral and garish hangings of the Nazis, to a moral act. They tried to avoid the exercise as a demonstration of might over those they conquered. That clever public relations spin worked on most people.

Goering boasted during the trial that in 50 or 60 years there would be statues of him all over Germany. No the statues are not there but the books, films and articles are worldwide.

The Nazis took full advantage of a good crisis to win absolute power. The Reichstag was set on fire and that was blamed on their political enemies. There was and still exists an underground tunnel from Hermann Goring’s residence to the Reichstag building. During Goring’s trial, a Nazi subordinate general testified that Goring proudly told him that he set the fire.

Will we have war in America? I’m sorry to say the ambitions of our politicians is making war unavoidable. We will have war. It’s inevitable. Goring was right.
Posted by Paul Huebl Crimefile News at 4/15/2010 12:32:00 PM

What are you doing to prepare for the MTV shown eventuality of cops coming to homes and loading families onto cattle cars, Paul?

Certainly not wise to defend when the enforcers are roving your neighborhood, rather pick them off when they are clearing houses miles away.

My anticipated frustration will be with citizens fighting with cops and military/mercenaries vs. stringing up politicians and policy making heads.

My present frustration is rationalizing why solid guys in the armed services, FBI etc. have not arrested Pelosi, Reid, Obama, Bush..on down the line for treason??

The largets army in the world,Americas armed citizens.

If you do not have firearms and a good supply of ammo,you are a victim waiting to happen.911 wont save you,a gun will.