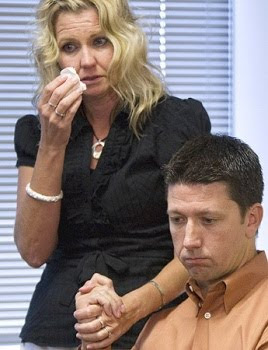 Peoria, AZ—In Arizona nearly every politician wants to zealously protect children. It’s a wise and popular position to take. Children need protection since they are helpless and often exploited or victimized.

Many parents feel that taking those photos is inappropriate. I guess it’s in how we view the bodies are creator gave us. Some people are guided by religious views and those views change within the same religions by location. I’m one of those that see nothing evil or dirty about nudity. There is nudity and then there is pornography. They are just not the same especially when it comes to family photo albums.

The case of Lisa and Anthony Demaree, is a frightening example of overkill. Last fall they brought in a roll of film to a Wal-Mart that contained some bath and playtime pictures of their daughters for routine developing.

When a photo clerk saw the pictures a call was made to the cops. Soon this couple's life changed forever. Arrests, jailing, horrific publicity, hiring lawyers, the state’s fostering of the children and bail bondsmen threatened the hapless couple. Conviction of exploitation of children carries the most draconian prison terms in Arizona than any other jurisdiction.

Cooler head prevailed at the Maricopa county Attorney’s office and there were no criminal charges sought. Finally after a month of foster care and intensive investigation Superior Court Judge J. Richard Gama returned the children to the parents ruling there was no bad parental conduct or danger to the children.

Now the couple is in court suing the state and other and others for the damages suffered by the family. The Arizona Attorney general is fighting the case not on the merits, but on technicalities such as failure to file a claim within six months of the catastrophic mess caused by over-reacting cops and Child Protective Service bureaucrats.

Understandably most officials would rather error on the side of protecting kids rather than leaving them at risk. But that is not a good excuse for this privacy invasion mess.

Public opinion on this case is divided along religious and cultural lines. Thankfully the law is what rules not some subjective religious or cultural opinion.

This is a case where you can count a jury disregarding the law and doing what they want in spite of the law. They will rule on the dirt or guilt in their own minds. Personal opinions will carry far more weight than the wisest legal opinion. Sometimes public opinion is dangerous and un-American.

Because of digital cameras we need not have film processed by anyone outside of our families. But then there are computer repair people with the values of Wal-mart employees checking out the contents of your hard drives. Be careful in Arizona or your life can change in a hurry.
Posted by Paul Huebl Crimefile News at 4/12/2010 05:45:00 AM