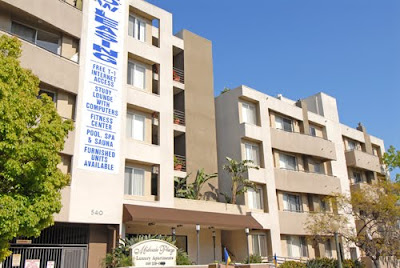 Los Angeles, CA--The Midvale Plaza Apartments located at 527 / 540 Midvale Avenue became the scene of a home invasion robbery last night. Six UCLA students were studying for final examinations only to find themselves being held-up at gunpoint.

Four male masked male offenders including one Black and one Asian were armed with at least one shotgun as they forced the students to turn over cash, jewelry, laptops, and their cell phones. The robbery crew tied up the students with shoelaces and forced them all to lie on the floor of the apartment.

The offenders escaped and are now being sought by UCLAPD and LAPD officers who will need all the help they can get.

The robbery makes little sense since students generally have little money. This sounds like a really dangerous crew that needs to be stopped and removed from society. Anyone with information needs to snitch on these thugs in a hurry.

Note: On January 3, 2010 there was another similar home invasion only a block away at 433 Midvale committed by a lone Asian male with a silver colored handgun.

if you dont own or carry a gun,you are a victim.

Is the UCLA area so bad that they need to hire security consultants to recommend security measures by the management as well as the tenants? Sounds more like UCLA-Bagdad than LA. You must be kidding...or in the consultant biz.

That’s a good question! When you build or own a building designed to house a large amount of people you have a responsibility to meet or exceed building codes. There are real threats you must deal with such as earthquakes, fire and safety.

If you fail to take reasonable steps to deal with those issues and people are victimized you will find yourself in court and get punished through whopping judgments. It’s a liability issue for owners.

People sitting on juries can be counted on making an example of property owners cutting corners at the peril of some of the finest college students in Los Angeles.

Like I wrote, it will be the lawyer retained by the traumatized students that will be asking the questions and the property owners better have the right answers.

For the future there are lessons for Midvale Plaza Apartments. Could a lock or two, higher gate or some other cheap fix have prevented the thugs from gaining access to terrorize and victimize the tenants? A few hours with an adequate security consultant could have made a difference in liability and prevention.

Yes, security consulting is some of the services I offer.