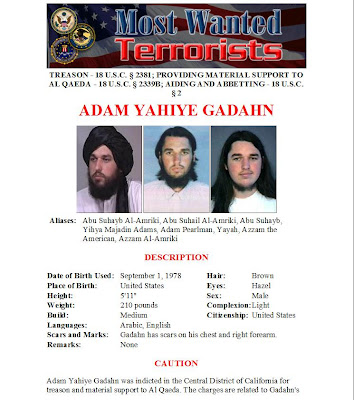 Gadahan grew up in a rural area of Riverside County, CA. Gadahan's father still owns the goat farm there. Gadahan became a Muslim joined a Mosque in Orange County where his hot temper got his a brush with the law. His assault on another Muslim at the Mosque resulted in his only known criminal record.

Gadahan was vigorously defended by is aunt who first claimed that her nephew was not involved with al-Qaida but later suggested that he’s must have been brainwashed in Pakistan.

One thing we know for sure Gadahn made videos that threatened his former country, tried to recruit Americans to join the al-Qaida terror campaign and pissed off a lot of Americans. He also urged al-Qaida sympathetic Americans to make war here.

Gadahan was soon indicted and had a $1 million bounty placed on his head. Finally Gadahan has been captured and may face now the music for his behavior.

Gadahan was charged with Treason. The only person in recent memory to face that charge was 70 year-old lady lawyer Lynne Stewart. Stewart is doing time for that right now.

The defense of treason is protected free speech. Gadahan’s propaganda videos are all speech but really nasty speech at that.

I’m much more interested in his associations and knowledge. I’d give him immunity if his revelations could cripple or destroy al-Qaida. I’d hope they’d give this kid the opportunity to redeem himself. Of course if he can’t deliver that he can rot in prison for the rest of his life. Treason is not a capital offense these days.
Posted by Paul Huebl Crimefile News at 3/07/2010 02:37:00 PM

I, too, was happy to hear that Gadahn was captured in Pakistan. My joy was quickly doused when I read that it was another American, but not Adam Gadahn. Oh well, his time will come sooner or later.