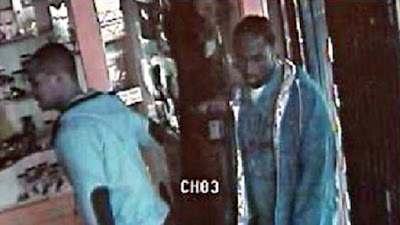 Studio City, CA—Dana Kathryn Jewelry is no stranger to armed robbers and they’ve been hit before. This time as in the last, the three thugs were caught on tape doing their nasty deed.

During Thursday’s lunchhour the trio posed as customers, drew guns and ordered salesladies to the floor and bound them with plastic zip-ties. They gathered some $200,000.00 in jewelry and cash before they fled into a grey automobile.

The Los Angeles area businesses are easy pickings for criminals since they don’t believe in armed resistance. Of course sometimes the thugs kill their unarmed victims. Failure to train and arm those in the Jewelry or cash businesses has been redundantly proven to be a real killer.

Once again it’s nice to see just how well all those California gun laws protect everyone.

The victims waited ten minutes for the LAPD to respond to the emergency. That lackluster response does not make me feel warm and fuzzy.

I guess this store is really popular with African-American thugs that enjoy terrorizing White people.


From The LAPD:
Los Angeles: Los Angeles Police Department (LAPD) North Hollywood Area Detectives are asking for the public’s help in identifying three armed bandits who stole $200,000.00 worth of jewelry.

Suspect #1 is described as a male Black with black hair and brown eyes, about 25 years-old, 6 feet 2 inches to 6 feet 3 inches tall, weighing about 190 pounds and last seen wearing a black/brown button hooded cardigan.

Suspect #2 is a male Black with black hair and brown eyes, about 30 years-old, 5 feet 10 inches tall, weighing about 198 pounds and last seen wearing dark jeans with earrings on both ears.

Suspect #3 is described as a male Black, about 5 feet 9 inches tall, weighing about 200 pounds and last seen wearing a blue hooded sweatshirt.


Here is video from the last stick-up that resulted in arrests and prison terms for the that crew.


For the current video, here is KTLA-TV’s story:

No excuse allowing clowns to walk in and terrorize. Double doors..metal detector, 12 gauge.

Reminds me of a biology test I once failed.

I was asked to name two things commonly found in cells.

Evidently the right answer is not Blacks and Mexicans!

I see a pattern

Those two women look like yuppie, liberal bleeding heart types. Not surprising that they didn't draw weapons and blow those robbers away. They'd probably rather sit down and have a latte with them and try to find out why they turned to a life of crime.