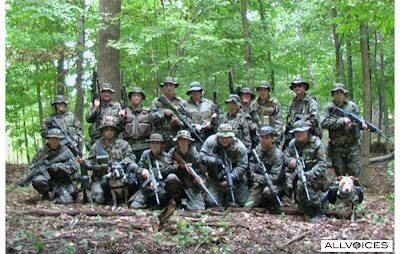 Detroit, MI—Nine people are in custody on allegations that they are part of The Hutaree Militia and that they conspired to murder members of local law enforcement agencies.

Indictments were unsealed this morning that were laid out with well-crafted press releases providing the FBI’s basis for making the raids, seizing property and arresting the accused. I can’t help but smell a big rat at the top of the Obama Justice department.

It’s very simple, the Obama administration knows they have virtually zero support from state and local police. They need to drive a wedge between those Americans resisting the Marxist inspired changes and the local police. This plot along with the overblown press releases may be total fabrication of a government paid snitch.

As for the group I suspect they are a bunch of religious zealots that like guns and play dress-up as they run around in the woods. If they were a real threat they would never had submitted to arrest by the metrosexuals that make up today’s FBI. So far, there is no evidence of a single violent act by this group. That’s hardly the profile of a dangerous group bent on killing cops.

The FBI claims they needed to act against the group since they say there was a planned covert reconnaissance operation. What’s unlawful or violent about that? That’s what my wife did at department stores in the days before the big sales!

I guess it was only a matter of time before the Waco style raids would target potential resistance groups that would obstruct the Marxist takeover of America.

Be wary of anything that emanates from the Obama Justice Department. If you’re a state or local cop don’t fall for this scam that is trying to frighten you into cooperating with Marxist revolutionaries.

Spot on. At some point, Congressmen and CEO's MUST start dying or will the Marxist nwo breeze in unhindered?

What a joke. I've never seen more news coverage of a "nothing to see here" non-event. Interesting how the FBI was so forthcoming with so many details, especially trumpeting the news that this was a Christian organization.

Of course, the only people that can be attacked today, by Hollywood, celebrities, the news and the feds, are whites and Christians.

Right I'm not falling for it.
Seems the informants do all the planning on these schemes.

Watch......many, many more of these trumped up "Ruby Ridges" to come in the days ahead! The gulags will soon be filling up.......

Conspiracy charges are nothing more than thought crime.

I agree with "Ruby Ridge", they need to send a message and try to scare the true patriots and "smear" them at the same time, in the public's eye.
People are getting pissed and are starting to show it. It's only a matter of time before we see more and more "showdowns" with the govt.