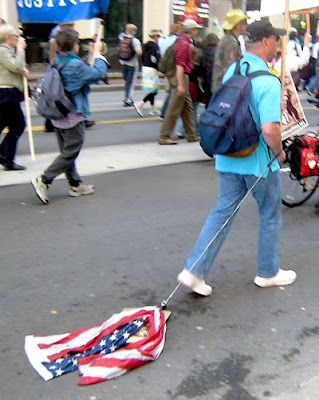 Chicago, IL—It was the very beginning of July, 1970 and I had just finished serving two years in the US Army after being drafted . I was off duty and enjoying the pretty girls at the North end of Oak Street Beach.

I saw a filthy looking hippie and he was wearing a United States flag like a diaper. I viewed the sight with utter contempt. I knew there was some relatively new law that prohibited the, “improper display of the flag.” I saw a sergeant from 018 driving by and asked him if he knew about that somewhat obscure new law. He actually had a copy of it and it was a felony with no misdemeanor reducer.

That was it, we arrested the hippy whose name was Joseph John Grant. It turned out he had a drug conviction and he was soon on his way to the 018 District lock-up after we called for a wagon.

We confiscated the flag and inventoried it as evidence. I soon learned that Grant was unable to post the relatively low bail.

Grant’s is preliminary hearing court date came up and he appeared before one of Chicago’s most colorful judges, Wayne Olson. When the case was called Grant began with his smart-assed attitude and pissed off Olson. The result was the case was continued for 30 days, bail was jacked up well beyond any ability to pay and Grant was ordered to see the Court Psychiatrist, Dr. Kelleher or Dr. K as we used to call him. Eventually Grant pled Guilty to the felony and got probation along with the 45 days or so he served in the Cook County Jail.

Judge Olson wound up doing a stretch at Club Fed after he was snagged in the Grey Lord Investigation of the early 1980’s. The FBI bugged Olson’s chambers and he got caught with his hand in the cookie jar.

Okay, I enjoyed that exercise in justice. Seeing that hippy punished for showing contempt for the flag so many Americans died under now gave me satisfaction. The penalty was harsh but Grant was everything I despised in the days following the Democratic National Convention, Jane Fonda and the sellout of South Viet Nam by the Communists in our own government.

Just a few years later the U.S. Supreme Court struck down the flag desecration laws throughout the land as protected free speech. When the ruling came down I had no problem with it since it reinforced free speech.

My military service was dedicated to freedom so the Joe Grant Flagman Case sparked my interest in the Bill of Rights. Today I’d thank that unwashed hippy for the education.

It’s was not just speech that is protected but unpopular speech. I have to be the first to admit that there is a significant portion of the population that would love to see my blog shut down and see me get beaten or worse. Thank God and our nation’s founders for free speech..
Posted by Paul Huebl Crimefile News at 3/29/2010 11:24:00 PM

Paul,
It's all immaturity and ignorance. As a person that has traveled and worked the world over I can say that some parts of the world although wonderful are still not the good 'ol USA. We always miss our home but there is nowhere else on earth that we have the freedom and opportunity that we do here. Unfortunately a lot of Americans have no idea. They should all go spend a few months overseas, try and open a business, buy a car, etc and see how much they miss America. They don't know how good they have it. We've raised a nation of winers instead of doers. The grass is always greener......