We Can No Longer Afford Drug Enforcement in America 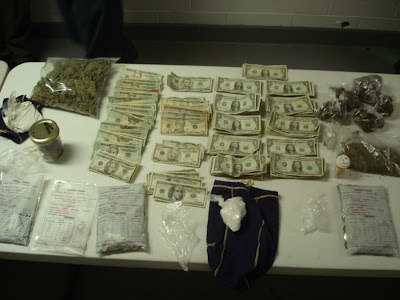 Everyday people are murdered because of our Drug War. People who are, or believed to be snitches, dealers, pharmacists, are killed because of the Drug War. Then there are ordinary people killed during the commission of robberies and burglaries by desperate drug addicts funding their habits.

The reasons for the drug related murders are varied and numerous. Cops needlessly risk their lives over the impossible task of eliminating drug abuse. They only effect law enforcement has, involves the correlation between drug prices and the level of enforcement.

The more enforcement we authorize, the bigger the illicit profits are for criminals. Drug enforcement is nearly as big a business as drug dealing. The entire industry needs to be shut down. Legalization and taxation is no solution because there is still a huge opportunity for criminal tax evasion corruption. We need to refrain from regulation of any drugs not involved with medical treatment.

The immediate impact would be a huge reduction in illegal immigration by drug criminals. Property crimes would be drastically reduced since the cost of illicit drugs is no more than sugar, coffee or tea.

Police and corrections people can devote their time to dealing with whatever crime is left. There will also be billions saved in the cost of prosecution and defense of drug crimes. Public defenders represent the bulk of drug offenders. The DEA budget alone is staggering. These agents could be all be redirected at foreign terrorists.

Some of the savings can also be redirected to providing medical interdiction and help to those who actually want it.

Would we have more addicts? Humans are always attracted to behavior that is deemed illegal. I just don’t see people putting that poison in their bodies just because it’s legal. Laws against impaired driving and such can still be enforced. Zoning laws can restrict where drugs can be sold.

Throwing hundreds of billions of our tax dollars away to fund an industry that makes even more money because of well intentioned drug laws is insane.
Posted by Paul Huebl Crimefile News at 3/25/2010 05:04:00 PM

Do you know why drugs are still illegal? In most major metro areas you could close 1/3 of the court rooms at least. Ok, you then need fewer judges and obviously less prosecutors and defense attorneys.
Since the vast majority of legislators are lawyers, why would they cut off their peers. Many judges, lawyers and legislators who have children who want to be or are lawyers.

It has nothing to do about right or wrong, they want to stay employed in their profession.

The so called war on drugs is not winnable,but it is fundable.

WHY DO WE SEND NONVIOLENT DRUG OFFENDERS TO PRISON TO MAKE THEM MORE VIOLENT??

Speculation is this murderer escaped into Mexico after killing a southern Arizona farmer this past Saturday. See http://www.myfoxphoenix.com/dpp/news/local/apx_rancher_found_dead_032910 for some details. Did the farmer come across a drug carrying Mexican? Was this retribution for an earlier action by the farmer? All unknown.