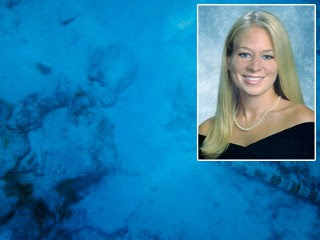 Rapho Township, PA—Fame nearly always brings hard cold cash so there are never ending attempts to garner fame such as the infamous Balloon Boy Caper. For every publicity stunt that backfires, there are many more that succeed.

Natalee Holloway disappeared some five years ago after leaving a nightclub with young strangers while drunk on a vacation in Aruba. Today we still don’t know if she was the victim of an accident, foul play or even if she found a new life somewhere by her own volition.

The Holloway case has captured the imaginations of those Americans that don’t have a life and hang on every word of the former prosecutor and now tabloid TV, crime harpy, Nancy Grace. These folks want the young men who were last seen with Holloway hanging from a gallows. Thankfully there is a decent form of Due Process on this Dutch governed island.

Now John and Patti Muldowney have produced a photograph of a shape on the ocean floor taken while snorkel diving. Now they have generated a major speculative media frenzy that has little basis whatsoever. I’m sure they got a hefty price for their photo.

Is the shape human remains? I can’t see a basis to draw any conclusion whatsoever.

If it is somehow a real human corpse, what are the odds that it’s Holloway? I’d ventured to say that millions of corpses have been dumped into our oceans. Some were murdered and others simply buried at sea. Then there are those that drowned or had fatal encounters with sea life.