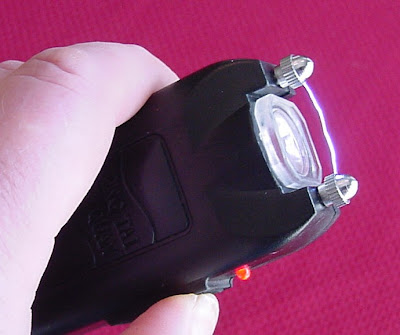 According to TMZ.com, the 13 year-old son of Jermaine Jackson bought an electronic stun gun over the Internet. When the child welfare bureaucrats found out they went into a total tizzy.

The non-lethal device hurt nobody and the sky did not fall except over the heads of the overpaid government do-gooders who raced to conduct a major investigation and confiscate the little shocker.

Jackson family members my yet find themselves in court over this nuclear over-reaction to a non-event.

I guess the losers hired to protect Los Angeles children need to take a ride out to America’s farmland where 12 year-olds have their own .22 rifles and use more powerful cattle prods to control farm animals.

Yes, the little guy wanted a James Bond defensive device to call his own but that should not be the government’s concern unless or until the device is misused. In L.A.’s school districts I suspect packing a stun gun for protection may slow down the school bullies who may otherwise actually injure the kid.

Apparently there is also a government panic that the kids have access to the Internet sans adult supervision. I guess they don’t like to see kids learn more than they are spoon-fed at the local public schools where the educational levels are another national embarrassment.