The Real Reason Health Care Is Broken In The USA 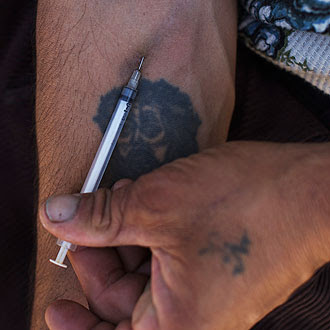 This is really simple to understand. We have many millions of poor illegal immigrants in our country. They simply don’t have insurance and don’t pay their medical bills as as we are forced to pay their tab of hundreds of billions of dollars per year.

This impoverished and uneducated alien group is also involved in all manner of criminal enterprises and suffer many more drug overdoses, stabbing and gunshot wounds than citizens or documented resident aliens. The same is true for their accelerated and astronomical birth rate.

The strain on our medical providers and the medical insurance companies is beyond enormous. Lastly, nothing prevents people who can’t or won’t pay medical bills or illegal aliens from making medical malpractice claims or filing lawsuits against care providers.

If we removed the trespassing aliens. Americans and legal aliens could well afford insurance.
Posted by Paul Huebl Crimefile News at 3/20/2010 01:04:00 AM

Email ThisBlogThis!Share to TwitterShare to FacebookShare to Pinterest
Labels: Obamacare

Plus Americans have to wait hours to get into urgent care because facilities are flooded with illegals.

Maternity wards are full of them.

Then there's the contagious diseases that they bring over here.

Actually the list of illegal alien health problems is way too big for this one blog piece.

Yup. I agree and have said this for a long time. The only reason obama and the dems want health care is because of the illegal alien. They want to grant them amnesty and give them healthcare.I wonder however if this frenzy over healthcare is simply a smokescreen to sneak an amnesty bill through the back door?

Of course our worthless Congress never once mentions this reality as they do whatever they can to water down our immigrations laws.
There is nothing wrong with Congress that dumpping the whole lot would not cure.

Oboma just wants more "free stuff" for his people. He ain;t fixing no health care system for white and black America - i mean those of us who work that is will have to pay some more for their lazy shit. People should wise up - all you caring folks - you are about to be nailed up the pooper! this bum has got to go.

A lot of folks don't know this but in 2006 the state of MA created their own subsidized state healthcare. It covered uninsured, and made up for what insurance compaines didn't pay. The MA sold it to the people by saying, "It won't cost that much and everyone will be covered. After listing to the state Treasurer (a liberal Democrat)last night, he said that the program has failed. It has failed firstly because it has nearly bankrupted the state costing way more than the politicials promised. He said if it weren't for Fed stimulus money then MA would be in bankrupscy. Secondly many hospitals are on the verge of going out of business because they are "forced" by the state to treat folks for free and since MA is in financial peril, the hospitals are not getting reimbured 1-for-1. He said about .60 on the dollar.

So how is this going to differ if we have government healthcare? It will bankrupt the country, put hospitals and people out of work, and create huge shortages of provider care.

Oh and did you know the IRS will be running and policing healthcare? It's in the bill!

A few months ago I had an infection that resulted in two minor surgeries and a two-night hospital stay with followup antibiotics and a couple of at-home nurse's visits. Total billing to my insurance was more than $24,000 and, yes, they took very good care of me.

I thank God (and my employer) for the good medical insurance my family enjoys. I work hard, pay in my own part, and we don't waste that coverage on needless visits. But when something serious comes up, we are very glad to have it.

There is no doubt that I got more "care" and more "treatment" from the hospital and doctors because of that good insurance. They were making up for the lack of payments for other patients, I'm sure.

And somewhere there are some illegals smirking about the good medical care they received in a hospital's Emergency Room for which they paid nothing.

Would an occasional "Muchas Gracias" be asking too much?

SOOOO TRUE!!! If they would fix what they already have in place it would make sense.