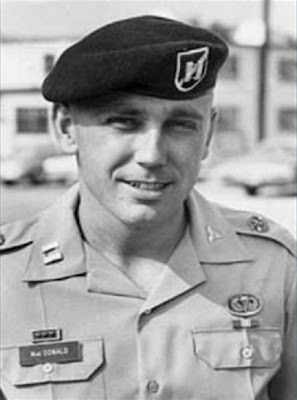 McDonald was convicted after a horribly botched military police investigation of the murders of his wife Collette, 26 and his daughters Kimberly, six and Kirstin, two.

The key physical evidence that convicted McDonald was a hair found in Kimberly McDonald’s fingernail that experts claimed belonged to her father Jeffery at the trial.

New DNA evidence indicates the hair was excluded as comming from any member of the McDonald family.

The Army CID was rife with incompetence back then and they did not have today’s modern investigative tools. The high profile case spun out of control and the investigation taken over by McDonald’s now deceased father-in-law and various politicians. Getting McDonald convicted became a cause celeb that generated publicity, a book, movie and lots of revenue.

The murders of McDonald’s wife and children were unimaginable and compared to the gruesome Manson Family slaughters in Los Angeles. There was evidence of a band of hippies being involved, a confession from a member of that group and allegations by a Deputy United States Marshall of witness tampering by prosecutors during the trial.

McDaonald was a handsome fellow with a roving eye for the ladies and fell to temptation as so many others have done. Prosecutors turned that into a motive for murder. Infidelity plagues American marriages but murder, thankfully is rarely involved in such relationships.

McDonald has been serving three life terms in federal prison and finally defense evidence may yet see the light of day. Witness that could of and should have given testimony for the defense have since died and admitting their hearsay but sworn statement into evidence will be difficult if not impossible now.

In addition to defense arguments there is the issue of some very real DNA evidence connected to that single hair that prosecutors have kept buried for many years.

Serious conflicts of interest, and corruption.

With that trumped up prosecution theory then the current serial adulterer and jack-off Tiger Woods would have committed dozens of murders. They should go book him.

McDonald has been moved around over the years, CA, AZ and now he’s at the FCI in Maryland. He instructs other inmates on health issues.

If the critical piece of evidence, the hair, doesn't match, now that DNA testing is been done...doesn't that make it all fall apart?