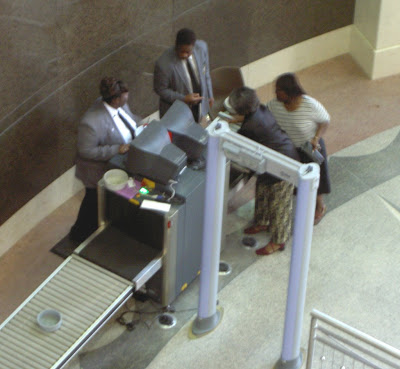 Washington, DC—Americans seem to be too willing to put up with nearly any kind of abuse in the name of security. Despite solid Fourth Amendment protections Americans entering the buildings their taxes pay for, they submit like sheep to invasive, intrusive and degrading searches of their persons and belongings.

This idea caught on like wildfire in the 1980’s after cowardly judges and bureaucrats wanted special protection from unhappy litigants and taxpayers. Metal detectors and X-Ray machines are everywhere as government agents or government contractors simply violate the rights of visitors conducting government business.

Of course our cab drivers, 7-11 clerks or people that face real danger get no special protection from government. This is about protecting the powerful, not the public.

In America we only frisked prisoners or criminal suspects upon Probable Cause or by a Search Warrant. To do otherwise is only the routine of a Police State.

Of course the screening is never used on those who demand others be searched. That is at a minimum a denial of equal protection under law. If one American must submit every American should have to suffer the undignified frisking.

At the Capitol there are members of Congress and their staffers that insist they are above being searched. They bitterly complain when asked to submit to the screening. The result is a plethora of internal police investigations alleging racial profiling, assault and abuse against the hapless Capitol cops. Congress has the power to rid its chambers of the vile practice but they are too timid to do the right thing.

We need to establish once and for all that all Americans are equal. Either everyone or no one should ever lose their right to privacy when entering a public building or airport. This should begin at the U.S. Supreme Court with the screening of those Justices that don’t seem to have a problem with this practice.
Posted by Paul Huebl Crimefile News at 3/17/2010 10:30:00 AM