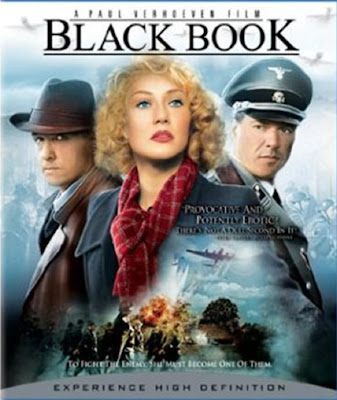 Los Angeles, CA—I first wrote about this great 2006 film only last August in a review. I caught the film by accident on the Encore Network one night. What a treat it was!

If there is a God of all film directors I’d have to call him, Paul Verhoven(Basic Instinct, Robo Cop,Total Recall and Independence Day). His other films are pretty good to say the least but he hit a Grand-slam Homerun with Black Book.

I have a serious problem. I can’t stop watching this film, over and over.

If you’ve not heard of this film that perhaps because it’s filmed in Dutch, German and only a bit of English. Don’t worry it’s subtitled in your language. The acting is so superb you will become part of it.

This film is based on a true story of a sexy and beautiful Jewish cabaret singer, played by Carice Van Houten, hiding out in Holland for the duration of the war and Nazi occupation. Van Houten’s character, Rachel Stein aka, Ellis de Vries is drafted into the Dutch Underground and spends the last year of the war, 1944 as a spy. The dangers Stein faces are unimaginable as she proves to be the ultimate survivor. This film is a non-stop thriller.

Verhoven’s entire cast is terrific. Sebastian Koch plays a kinder, gentler, head of the local Gestapo who understandably falls in love with the beautiful espionage agent. The love scenes are real, since these two actors were smitten both on and off screen. Sadly the distance between Amsterdam and Berlin ended their relationship, according to my very own beautiful spy, Andrea, living in Berlin.

You will need a score card to separate the villains from the good guys as every thrilling scene unfolds. The script written by Gerard Soeteman and Paul Verhoeven is as good as it gets.

You will see and recognize Van Houten, Christian Berkel, Waldemar Kobus and that stunning redhead, Halina Reijn from Black Book in the Film, Operation Valkerie that also stared Tom Cruise as Col. Claus Von Stauffenberg. Reijn shows up, this time as a brunette playing Stauffenberg's secratary.

I think the greatest thrill I’d have in my life would be to work with the incredible cast and crew of Black Book in another great European film. Mr. Verhoven, I’m available! Just have your casting director call my agent! Of course there is my screenplay, Come Friday waiting for someone like you to direct!

Carice Van Houten is very busy making more films right now. She has what it takes to be the greatest leading lady ever.

Don’t rent this film, buy it and see if you can stop watching it.

The cast and crew of Black Book.

Yes,this is a great film.I highly reccomend it.

I can't agree with you more Paul. I saw this at the Music Box as part of a film festival back then and I bought it on DVD once it came out. Thanks for spreading the work about such a quality film.

This better be a good one Paul or I'm going out west and kickin some ass. I just bought it based upon YOUR recommendation. Cost me 9 bucks. I could have used those 9 bucks for another bottle of Night Train.

The scene where the pictured hottie is shaving herself is worth $9 alone.

Well, you were right Paul, this was an excellent movie, well worth the 9 bucks. Worth three times that actually!