When Curbside Justice Trumps Due Process 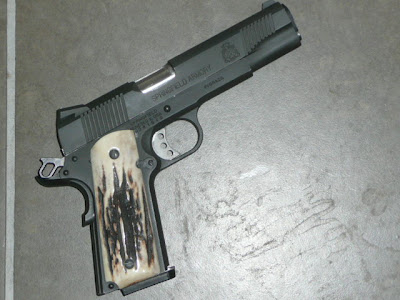 Venice, CA—It was a nice morning on September 19, 2010 when a woman here was walking from her car to her place of employment. Soon a large Hispanic, cowardly thug exited a van and began savagely beating a woman in an attempted Robbery. The monster is caught on surveillance video viciously punching the helpless woman after he knocked her down on the ground.

It’s really just too bad there was not someone armed and determined with a gun that could have put two shots in this creep's chest and one to his head.

This sub-human ran away from the crime and you can be sure this dangerous predator will injure or kill innocent people whenever it’s convenient.

Due process is how we fairly sort out guilt or innocence after arrest and investigation. It’s unfortunate a 1911 .45 ACP was not in the right hands to dispatch this mad dog on the spot. That would be the proper and just application of Curbside Justice. Lives would be saved in the process.

Looks like some nice Eagle grips and a Novak sight job,sweet!

THAT BEES MY BROTHER...HE BEES BROKE...HE NEEDED HIS FIX...CUTS HIM SOME SLAKS

What a spineless sack of shit that guy is.

Too bad Sgt D.S. wasn't out delivering pizzas that afternoon .