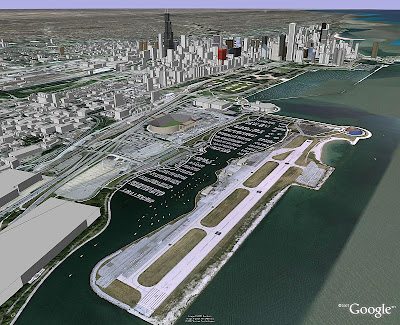 Meigs Field was a great little airport for general aviation and a historic landmark. It was the first airport I saw as a child so long ago.

Businessmen need a place to commute by air that’s convenient to Chicago's Loop. Meigs Field was important to business. Richard M. Daley spent his time destroying business in Chicago and Meigs Field’s removal was high on his list.

It was during the pre-dawn hours of March 30, 2003, without required approval from the FAA, Daley ordered the runways destroyed and stranded scores of airplanes tied down there. Chicago’s taxpayers have suffered ever since.

Whoever replaces Daley as Mayor should have the brains to restore Meigs Field to the taxpayers who supported the facility.
Posted by Paul Huebl Crimefile News at 9/09/2010 01:55:00 PM

It's not too late to still buy a piece of Meigs Field ....

I have one! It's a creative and unique idea!

Will it handle AC130 Spectres??

That would make a great trap and skeet range!

When Daley pulled that stunt on Meigs Field, that's when the Feds started to go after him; and that's why he's leaving office. The feds have enough to nail his kid and nephew. They're not to far away from whacking Daley with an indictment. Daley not running for reelection is an attemt to sway the feds to cease their investigation of him; with the corrupt Obama in office, this will probably happen as he tells US Attorney to cool it on Daley.

As for Meigs Field, it was torn up because developers didn't want the noise of Meigs to interfer with selling those skyline condos that line Lake Shore Drive from Roosevelt to 18th Street. Any major news outlets ever report this? Hint: You'll find former head of the CTA Frank Kruchi(sp?)in the woodpile with this deal.

The sickest part of this story was the medias gulping down the line of shit from Daley that tearing up Meigs was to prevent terrorists from attacking Chicago. This was only one reason to tear up Meigs: MONEY.

Here's the great part. When the feds went after Daley, he hired Jody Weis in another attempt to keep the feds away from him.