Actor Kevin MCarthy Dead at 94--YOU'RE NEXT! 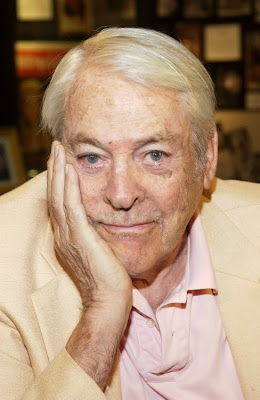 As a youngster I saw a classic horror film that left a huge impression on me. It was, Invasion of The Body Snatchers. It starred Kevin McCarthy and a strikingly beautiful actress, Dana Wynter. This was one of my favorite films of all time.

The TV series Twilight Zone came along and my favorite episode was called, “Long Live Walter Jameson.” McCarthy played a history professor with a special gift. He could explain history just like he’d been there. That was because he had. Along the way he outlived a number of wives most of which he left when they aged and he didn’t.

McCarthy was in so many rolls working both live theater and films that spanned nearly 70 years. His good looks and commanding baritone voice never left him.

It was about six years ago that I had a chance meeting with McCarthy in Sherman Oaks, where he lived. McCarthy was a man who enjoyed life along with his family and friends. He still enjoyed making new friends.

McCarthy lived a full and exciting life that most people can only dream about. McCarthy will live on because his passion and life’s work is preserved by our wonderful technology. He may be gone now but he won’t be soon forgotten. McCarthy's greatest line from Body Snatchers was: “Look! You fools! You’re in danger! Can’t you see? They’re after you! They’re after all of us! Our wives…our children…they’re here already! You’re next!”—Dr. Miles Bennell

What a shame. Great Actor, Paul! My only wish before kicking the bucket is to have dinner with Jack Nicholson.