Self-Defense for Dummies where guns or carrying them are banned 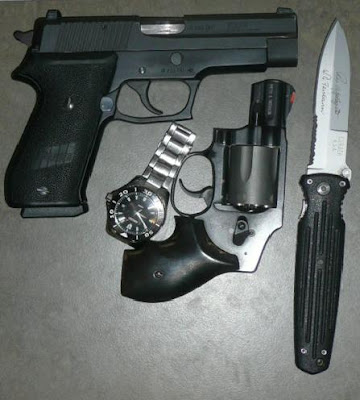 Chicago, Il—You live in this once proud city but now it’s broken. Police are outnumbered, outgunned and demoralized. Chicago police have taken to holding diplomatic summit meetings with the city’s most notorious thugs to stop the killing. Chicagoans are simply not safe and must turn to self-reliance for simple safety sake.

If you have a job or a life that puts you in proximity to danger you have little choice but to take steps to survive. I’m not talking about being in constant fear but where you have those moments when the hair on the back of your neck sticks out.

Our creator has given us some gifts to help with survival. One is the gift of fear and another is the basic instinct for survival. Some politicians have placed themselves above our creator and the Constitution of the united States that give you the absolute right to keep and bear arms. They have taken it upon themselves to decide for you what steps you can take to defend your life and that of your family. If you voted for these slugs you deserve exactly what you got.

Two recent U.S. Supreme court cases, Heller and McDonald have reaffirmed your right to carry firearms and protect yourself. The problem will be having those jurisdictions like Chicago to not violate your civil rights. They want to hold you down while street thugs beat, rob, rape and murder you. No you don’t have to accept this.

The Fourth Amendment allows you to be free from police searches. Law-abiding people are very rarely searched outside of airports and government buildings. Contraband found during an illegal search can’t normally be used to convict you of anything. When was the last time you were searched by police?

Carrying a gun for self-defense in jurisdictions that simply refuse permits or have an outright ban carries little risk of discovery.

Carrying a gun does not permit you to behave differently. It’s really no different than wearing a seat belt when you drive. The gun gives you a fighting chance depending on your ability. There is a serious need for professional training in safety, marksmanship and the justifiable use of deadly force. A visit to www.nra.org will give you loads of training options near where you live. There is a cost involved but generally it’s affordable.

Proper carry techniques that will insure the low profile of your pistol or revolver is extremely important. You gun must be accessible but the gun or its profile must not be visible or you could find yourself arrested.

Bigger is better so please avoid those tiny pocket guns. Usually a decent knife is a better defense tool than small caliber handguns.

In Illinois, by all means obtain the Firearm Owner’s Identification Card. You need it to buy or possess guns and ammunition. This law is enforceable because they freely issue the cards with only minimal cost.

Carry the gun wherever you feel the need to do so. It’s your judgment and yours alone. The rules are simple if you are vulnerable you need a gun.

Lawful self defense rights are never nullified if you use even an illegal weapon.

If you are somehow arrested in Illinois, for carrying a concealed weapon you usually are required you to post $2,500.00 in cash to stay out of jail pending court. If you don’t have the cash you will be put in front of a judge and as long as you don’t have legal baggage like a criminal record you probably will be released on a simple promise to appear. Waiting for a judge can take 24 hours so keeping cash on hand is a better idea.

If you must resort to deadly force don’t stop shooting until your attackers are no longer a threat. Next is a video that will advise you further.

I like your holy trinity,SIG,S&W snubby and an Appelgate folder.

Once again, having all this in mind.....how bout the airport police not even able to carry a weapon on duty let alone off duty!!!! What about them when it comes to off duty? This is just wrong.