At least One Masquerade is Finally Over in Chicago 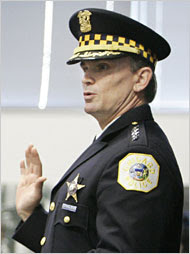 Chicago, IL—The days of Jody P. Weis as police superintendent are rapidly coming to an unceremonious end. The former FBI agent had zero patrol experience on any large police department. Hired as a City Hall, “Yes Man” he was a square peg in a round hole. It appears he’s now become a sacrificial lamb offered for slaughter.

Upon arrival to the department Weis was quickly nicknamed J-Fed but that changed when he actually fled from an in progress shooting during a CBS2 television interview. His nickname was quickly changed to J-Fled as he was publicly humiliated for his cowardice.

One of the worst sins Weis committed during his tenure was wearing the uniform of a Chicago cop that he never earned. The only other civilian Chicago police superintendent in my life time at least was an Almeda County cop in California. That was before he became a criminologist and author. The late, Orlando W. Wilson never once wore the uniform, but he was both admired and well-respected by the rank and file officers.

The FOP, Lodge 7 is believed by many officers to be owned by the Daley/Burke Crime Syndicate. I can’t help but believe this planned protest to improve officer safety and bring the ouster of Weis is fully sanctioned on City Hall’s fifth floor. Daley will save face through giving some meaningless concessions, “for the good of Chicago.”

It will take a lot more changes to raise the morale of the rank and file officer than dumping Weis. The next superintendent must have independence from City Hall and the neighborhood reverends.

Blaming law-abiding Chicagoan’s gun rights for the carnage on the city streets must end as those rights are bolstered through solid support of a right to carry law. Police must enter into a partnership with the law-abiding public to keep the cowardly thugs under control or in prison. This can happen with the right leadership and citizen involvement.

The hiring and promotion based on anything other than real qualifications must end within the department.

For safety sake, officers must be immediately given wide latitude in obtaining and carrying proven police carbines and shotguns. Training should be an issue but officers get almost nothing in the way of in-service training for their handguns. This is an emergency that can’t wait for funding that will probably never arrive. Certainly every military veteran within the department has that training on the M-16/M-4 carbines already.

Manpower is a huge problem and police recruits just can’t fill the need for seasoned officers. Perhaps a temporary program to hire already retired cops would be cheaper than overtime to fill the manpower gap. Officers older than 63 can be hired as civilian investigators or be placed in other less active positions. Of course they can and should carry firearms.

I don’t expect much from the Daley/Burk team who just want the Weis problem to go away because it has been embarrassing. They have no intentions of giving up control over the police department’s day to day activities.

Chicago cops and their families need to participate in this effort:

How bout this....lets start by letting the Chicago airport cops carry at least a firearm 1st?? Then we can start worrying bout the city getting carbines and shotguns!