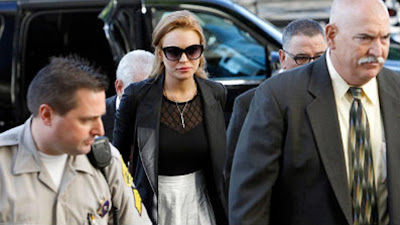 Beverly Hills, CA—Like most Americans I hate recreational drugs and the damage they do to productive lives. However, I hate the ill-advised and failed Drug War much more.

Lindsay Lohan fell under a DUI conviction and was placed on probation for three years. They’ve doggedly perused Lohan as she stumbled and fumbled her way through the Hollywood VIP club scene and publicity machine. Lohan fell under the spell of the Happy Dust with the enthusiastic enablement of trusted friends and advisors from Hell.

The judge in this case, Elden S. Fox violated Lohan’s right to reasonable bail and due process. The judge also knows getting a hearing before the Court of Appeals will take longer than the month Lohan will be rotting in jail pending the next courtroom, television extravaganza. There’s no point in appealing Judge Fox’s rulings if she can’t be sprung from the Lynwood Gulag.

I challenge anyone to find a single physician who is not on a government payroll that will support our out-of-control and insane Drug War.

This is not about crime and punishment but raw government power. Lohan is getting the “star” treatment that will not do anything but satisfy the ego of government thugs.

I, for one, wish Lohan a speedy recovery from her drug demons and the government sponsored torture she is receiving. I want Lohan to succeed and be all that she can be. I hope she can somehow still pull off a victory.\

An Update!
Like I said Lohan was entitled to bail. Judge Patricia Schnegg, Assistant Supervising Judge for the L.A. County Criminal Courts has reversed Judge Fox's ruling and set bail for Lohan in the amount of $300.000.00. That bail will require Lohan to pay a bondsman $30,000.00 in cash in order to be released. Lohan will never see that 30 G again but she will be free until further action by the court.
Posted by Paul Huebl Crimefile News at 9/24/2010 01:28:00 PM

Government really needs to get the fk out of peoples' business...what we put in our bodies and all. Getting blasted is certainly what it's all cracked up to be. (pun intended)

Moderation however is key. No more diving into a vat of cocaine Lindsey...and stop the muff diving, it's bad for the soul.

She could put up the whole $300k and get it all back, assuming she doesn't run, right? Or do they require a bonding company in this case?