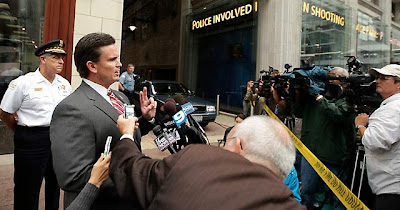 Not once in recent memory has Chicago’s media undertaken an investigation of City Hall chicanery, their insider dealing or their violations of the Shackman Decree. Instead the local media editors and news directors are only doing, “puff interviews” of these miscreants serving instead as the Daley-Burke Public relations machine.

The local media welcomed Jody "J-Fled" Weis as they canonized him to Chicago’s Sainthood. Of course Weis had no real say in day to day operations since police operations are micro-managed by the Daley-burke Syndicate that serves its own nefarious agenda.

There was no way for Weis to succeed in public safety efforts under City Hall constraints. Weis was never equipped for the job by training or experience. Weis’0nly real job was to placate the local reverends and provide the media with meaningless doublespeak about crime control efforts.

The facts are that Chicago’s tourists are the most desirable targets for Chicago’s violent thugs because they never return to testify in court and the criminal charges are always dropped. Any arrests are rendered meaningless.

Chicago’s mass transit has been abandoned by police in favor of cameras. I guess cops don’t make campaign contributions to politicians but the selected camera vendors do. Cameras positively can’t identify or arrest anyone. Even the finest quality digital video of a crime without a living eye-witness is inadmissible hearsay evidence in court!

Cops themselves have been targeted because the thugs know they can’t summon sufficient help for back-up. The organized thugs have a wide selection of heavy weapons to use against the police. Most cops on the other hand are barred from carrying more than their underpowered pistols or revolvers.

There is only one proven cure for Chicago’s law enforcement troubles and that’s enough well-armed manpower to take the criminals to task.

Chicago’s media get’s there direction from City Hall’s political hacks rather than the experts. The real experts are the rank and file street cops who are forbidden by the department from talking to the media.

Chicagoans demand that cops to magically appear the second they press 911 on their cell phones. By the time a police communications worker can answer that call the crime is usually over and the offender has already fled. With any luck the victim is somehow still standing.

The citizens of Chicago have been forcibly disarmed by unconstitutional laws, and are at the total mercy of violent criminals. Instead of citizens struggling with cell-phones they should be drawing suitable defense weapons as the unceremoniously end the attacks. Thugs are notorious cowards and don’t want to face armed citizens.

Dealing with Chicago’s crime takes a combination of sufficient well-equipped officers, along with trained and armed citizens.