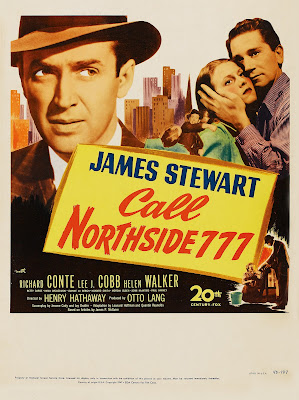 Chicago, IL—This was a true story about the December 9, 1932 murder of 9th District officer William Lundy, 55 inside a delicatessen located at 1226 S. Ashland Avenue . Two unknown men entered the store and soon the 29 year police veteran was shot dead.

1932 was a tough year for Chicago that recorded 364 murders. Eight of the victims were Chicago cops. The police stars they wore hang in the lobby of Chicago Police Headquarters today.

Some 18 years later in 1948 a classic movie was made of this compelling tale starring Jimmy Stewart, Richard Conte and Lee J. Cobb. This film is available at Netflix.

The locations used in Call Northside 777 are all very real including the old Cook County Jail, Criminal Court Building, a Chicago police district station, Stateville Prison and Tribune Tower. The Chicago police uniforms with the authentic stars and shields of that day were used by the filmmaker and director Henry Hathaway.

The relatively new pseudo science of lie detection through the polygraph machine was used in this film. Playing the role of the examiner was none other than real polygraph pioneer, Leonarde Keeler. Keeler played himself before he died only a year later at age 49 from too much booze, cigarettes and hard living.

They changed the names of the real characters including changing Lundy’s name to Bundy.

A real surprise for me to learn was that most of the cops in the film were not Hollywood actors but Chicago cops! The director found some pretty decent actors in the station houses.

One scene in the film shows an actor climbing some stairs with the narrator saying he was he was turning himself into a police station. That grand staircase is really just inside the former main entrance of the old Cook County jail. It is still there but sits behind a fence now.


You won’t find this style of film made today and that’s a crying shame. This was what Film Noir was all about. This is riveting stuff and a must for Chicago cops, prosecutors, defense attorneys and crime reporters to watch.

I keep asking myself why, they don’t make movies like this masterpiece anymore. This film still rocks today.

Other than to say the acting, direction, and story-telling was first rate. They did get a little melodramatic with the ending but it added to the excitement. I don’t want to spoil your experience by giving away the story line. This trailer will give away too much as it is.

After you watch the film get all of the real details on this case from Northwestern University's Center Against Wrongful Convictions.

I saw this movie years ago and watched it several since. Great movie. There is something about black and white cinematography that a film in color could never match.

Thanks for the link, Paul. I'll definitely check it out. Looks like a good movie.

One thing that always bothered me in the movie.....trying to get the date visible. If they hadn't gotten the date, wouldn't the front page be enough to prove it was that date's paper?

The screenwriters and director wanted to include the new technology of the day to their audience. The polygraph, the wire photo transmission invention and newspaper mechanized typesetting were all new and exciting discoveries. 62 years later that stuff is out of the stone age.

They did change things around a bit to increase the drama but the results were the same. Justice took 11 years for the innocent and the guilty got away with murder.

Thats whats wrong with this country,a serious lack of rotary dial phones,especially those kool pay ones.

I don't know many cops who would sit in a restaurant or any other place with their backs to the door.