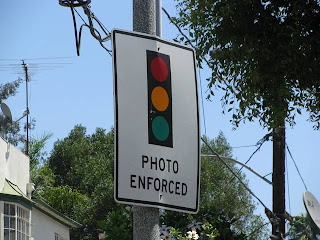 Los Angeles, CA—In a court of law there are few hearsay exceptions. Photographs and documents can’t simply jump up on to a witness stand and testify. Foundation must be established and a live witness that saw the event must testify that the photograph accurately depicts what he saw with his own eyes.

Judges around the country have let the Extortion Camera Photo Enforcement Mafia get away with, Hearsay Murder. Not anymore, at least in California.

Since Arizona judge’s retirement is actually attached to traffic fine collections they have a significant conflict of interest every time they hear a traffic case. I will never understand how that kind of crap can stand in America.

That California Camera Hearsay Ruling should get the attention of every lawyer and judge in all 50 states since we are dealing with the same Constitution.

The problem with the camera enforcement evidence is that denies the accused the Constitutional rights to face and cross-examine his accuser. It is insufficient for some clerical person or cop to claim the evidence presented is accurate. The contract providers of the extortion cameras are simply not set up to deal with American Due Process of law.

There are significant additional helpful roadblocks that exist but of course they need to be argued by an experienced lawyer. Top notch Los Angeles, personal injury lawyer and my friend Lowell Steiger put all the sordid details on his law blog.
Posted by Paul Huebl Crimefile News at 9/10/2010 01:20:00 PM

Thanks for the link.

We just picked up the rental car for our LA and Santa Barbara junket next week -- a chinese red Camry. Boy, is that gonna be a speeding ticket magnet or what?

At least with your link, we might be able to beat a couple of red light snapshots!