Phil Spector Was In Court Today 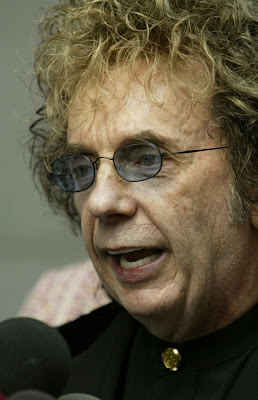 Los Angeles--Preparations by Spector’s defense team for yet another trial on the Lana Clarkson death inquiry are in high gear.

The trial is expended to take place despite a serious defense effort to derail Spector’s indictment. The odds against heading off the second trial are astronomically poor but efforts must be made to protect defense assertions during appeal should there be a conviction.

The trial won’t happen until the stars align for judicial, prosecution and defense calendars. Another part of the equation is the health, career issues of the judge and lawyers involved. At least one prosecutor and the judge are under consideration for elevation within the system and that would require substitutions and a substantial delay.


I suspect Judge Larry Paul Fidler brought too much attention onto himself during Spector’s first trial to be getting any serious consideration for an appellate position these days. Judges that become media or entertainment personalities are never welcomed by peers in higher courts.

Alan Jackson is a cut-throat prosecutor who takes the truth and adds 25% fiction to make the case against the defendants he prosecutes. Jackson has a gift for that and bringing an abundance of sympathy on drug addicted, emotionally challenged and suicidal people such as Lana Clarkson he wrongfully labels as murder victims. Once the decision is made to prosecute Jackson’s job is to win. Seeking justice takes a back seat.

Jackson and Fidler are too emotionally involved in this case to be really effective in convicting Spector.

Judge Fiddler wants nothing more than to be able to tell the sheriff to take Spector into custody pending a sentencing. Fidler is anything but impartial in this particular case.

The case was continued for pre-trial issues until July 29, 2008. A firm trial date was set of September 29, 2008. Firm in this context is their best intentions and really has at least a 60% chance of being bumped beyond that date.

The California Supreme Court has not yet ruled on the defense request to remove Judge Fidler for demonstrated bias.
Posted by Paul Huebl Crimefile News at 5/22/2008 11:45:00 AM

Alan Jackson is a cut-throat prosecutor who takes the truth and adds 25% fiction to make the case against the defendants he prosecutes.

Like far too many others. Nancy Grace claims defense lawyers are paid liars. They don't dare to be as the consequences for their clients and themselves are too extreme. It is far too many of the prosecutors who misrepresent the facts to the court, pay for or extort perjured testimony and, in all too many cases, violate Brady or even the law by hiding evidence from the defense.