I’m A War Hero And Have The National Defense Medal to Prove it! 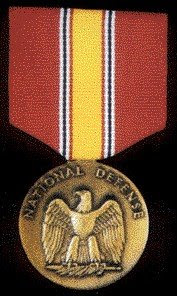 How can that be when I served as an Army draftee in Germany and not Viet Nam? Yes, it’s true that the only combat I saw was those pillow fights with the local women, and they always won. Perhaps it was despite being out-numbered, I still fought them all gallantly above and beyond the call of duty? Okay I will confess to surrendering and doing what the nice ladies told me to do.

The pictured Nation Defense Medal was the one I earned for simply showing up for duty. Really I’m proud of my service as a medical corpsman as though I won the Congressional Medal of Honor. I earned that medal along with an Honorable Discharge after two years required of active duty.


The feds are prosecuting a despicable politician, Xavier Alvarez, 50, of Pomona, CA. Alvarez ran and was elected for office on his pretend military record platform and the Congressional Medal of Honor he claimed to have earned.

Alvarez pled guilty to violating the Stolen Valor Act of 2005 which is federal misdemeanor and awaits sentencing on July 21.

Jail, probation, fines or parole doesn’t fit this crime. A simple severe beating followed by being tarred, feathered and run out of town should be the price to pay for this jerk.
Posted by Paul Huebl Crimefile News at 5/05/2008 01:32:00 PM

Do you have a link to the original article?

Do we have to play "name that party"?