Another Child Shot By Chicago Police For No Reason At All 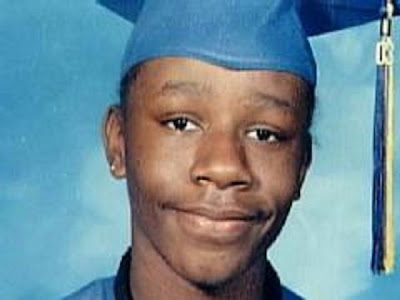 Chicago--But he’s a mere child! Not really, he’s 19 years old. Javara Gardner’s 8th grade picture (Class of 2003) is proudly displayed by WMAQ-TV with allegations that an innocent man was shot down by police for no reason.

Some in the crime ridden neighborhood's 5800 block of South Damen Avenue now claim police planted a gun as evidence to frame the now paraplegic Gardner.

This is another racial hot potato that began Sunday afternoon when police responded to a 911, Man with a gun call.

They spotted Gardner who ran, dropped his gun and was shot while trying to retrieve it and shoot a cop.

Now the neighborhood called in all the reverends, lawyers and gullible news media to spin this story around and around.

They are screaming Gardner was shot in the back. That seems to match the officer’s stories because he’d have to bend over and expose his back if he was picking up a gun.

I ask my brothers in blue why bother to do your job if you are not wanted? I say Darwin’s law is the only one they need in Chicago anymore.

Officers should simply come in write, reports, allowing the streets and sanitation department and the cadaver removal services clean up the messes. The benefits are fewer complaints, lawsuits and you won’t be disgraced as you're stripped of your police star.

LOL.. MAQ just edited their story.. They took down the picture and merely state that a "man" was shot by police.. No real details at all..

Paul -- the guy was pushing his son in a stroller! You think he should have been treated as an accomplice?

For the man who helped Ronnie Barlow, you do surprise me sometimes.

Ronnie barlow's life was in danger and he acted in self-defense and so did the cop that shot this armed jerk.

I see this lad's 8th grade grad pic but what about high school?

Don't tell me he dropped out!

Open up this kids juvenile record and we can document what type of person he was.
Remember "YOUR RAP SHEET IS THE SQUARE ROOT OF YOUR LIFE!"

you have got to be kidding me.. ponder this.. if you shoot at me today and miss.. and i shoot and kill you tomorrow are you really a victim.. Hell no! I know this young man was a pillar of the community and the next excuse is that he is such a great kid and was just caring a handgun for protection... Im sorry but most good kids I know in fact all of them dont need to carry handguns for protection. Lets also not forget the most important thing for all these people that have been shot by police in the last month.. IF YOU POINT A GUN AT A POLICE OFFICER YOU SHOULD EXPECT AND KNOW THAT YOU WILL BE SHOT AND MOST LIKELY KILLED! Police officers are not here to hope the go home at the end of the day and try to shoot you in the foot if you point a gun at them. Some of the comments see and hear on t.v. have to be the dumbest thing I have ever known. Also kudo's to the new Jody Weis who hit the nail on the head and stated what anyone with even a little common sense already know.. ITS THE PARENTS FAULT.. NOT THE POLICE.. these kids are so a product of their enviorment.. maybe not all but 98% sounds right.. It is not against the law to discipline your kid when he is out of line. My mother always told me as a kid.. "before you are out in the street breaking the law where the police have to arrest you, I will be the first one to spank you and straighten you out at home so it doesnt get to that" Parents take responsibility of your kids when they are young .. not when they are teenagers and its to late!