J-Fed Met with The Troops 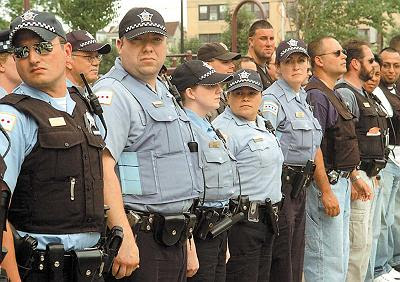 The meeting was attended by 100 to 200 officers. Second City Cop readers and another fine blogger, Rue St Michael Bienvenue recorded the minutes for posterity.

J-Fed had nothing concrete to offer the undermanned, poorly equipped and demoralized officers. There were a few gripes put forth that J-Fed is taking under advisement.

Little was settled but J-Fed is figuring out he has no clue about the street police work he’s supposed to be running.

O.W. Wilson came in as a civilian but he was once a street cop before he became a criminologist and professor. J-Fed was a federal paper pusher.

J-Fed would do well to lose the uniform and gain respect. He needs to figure out how to get the worthless mayor and city council to bring the department into the 21st Century. J-Fed needs to deal with manpower, equipment deficiencies. Nobody can be expected to work where promotions are based on clout, race and sex quotas rather than ability and knowledge.

I have two words for J-Fed, short term. The real problem is a city administration mired in corruption and greed rather than any concern for public service.
Posted by Paul Huebl Crimefile News at 5/15/2008 12:30:00 AM