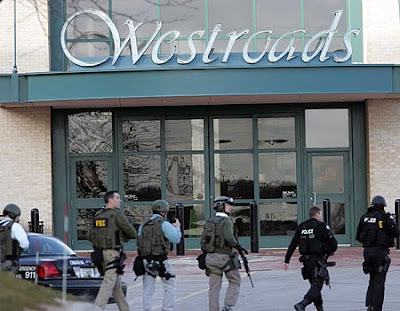 At first blush this seems an issue of private property rights but it’s more about simple fear and a poorly thought out solutions.

Workplace violence was never a problem until our industries disarmed their security people. 45 years ago nearly every security guard in America was armed and crime was insignificant compared to today.

Many say that times have changed and they’re right. Changes were made in the way we deal with crime and gun rights.

As anti-gun rights hysteria spread in America the guards were slowly disarmed. Workplace violence became a new phenomena facilitated by that disarmament.

Las Vegas hotels and Casinos only had armed security until the corporations gained control from those so-called Mob owners in the early 1980s. Take-over robberies never happened and crime in these places was low.

Once the corporate bosses disarmed their security, tourists were being killed during brazen daylight take-over robberies. Casino crime in general was on a huge increase with unarmed security.

In recent years Las Vegas hotels and casinos have quietly rearmed their security staffs by significant percentages and the tourists are much safer.

We’ve learned that laws don’t disarm criminals and neither do the house rules of businesses, malls and restaurants. The house gun prohibitions do disarm the most respectful employees and law-abiding patrons.

Unarmed security officers easily become unarmed hostages and additional victims. Unarmed guards are of little or no value anywhere they are employed.

Among those respectful and law-abiding employees and patrons are well trained military veterans, former cops and experienced hunters and sports shooters.

Perhaps it’s time to change the odds in favor neutralizing deadly threats by ending the unenforceable and meaningless rules. Guns do save lives.
Posted by Paul Huebl Crimefile News at 5/04/2008 10:16:00 AM

Amen. I work for IPC International in Texas at a Mall and we need to go back to the old way of doing things but IPC is scared of "liability" so they make a HORRIBLE COMPANY to work for. Their guards are unarmed (not even pepper spray) the most we have our handcuffs, last time I checked those won't stop a bullet. I work in Texas and Texas law gives security officers more "authority" than IPC gives us; for example a Comissioned Security guard in Texas CAN CARRY Pepper sprary, baton, and a firearm (if qualified). We can also carry handcuffs. IPC does not supply us with ANY OF THAT STUFF, and then calls us "public safety officer" what a JOKE!!!! On top of that they make us wear hats that make us look like porn stars from the 70's. Also their policy on having a consertative haircut when coming to work (well wearing the hat DEFEATS that purpose) at least the one they give us. Thank God I'm only working for IPC until I get out of the local colleges criminal justice program and then become a REAL POLICE OFFICER.

Amen armed guards would help I live in Texas and the State of Texas allows for comissioned guards to carry batons, tasers, batons, and for non comissioned guards to carry handcuffs. However I work for IPC and they do NOT let us carry anthing but handcuffs and a little bitty maglight. IPC doesn't allow this because of "liability" I'm like then why in the h**L did IPC go into security?? if they are scared of liability they need to find something else to do. Security companies should NOT be worried too much about liability especially if they are gonna title their officers "public safety officer"