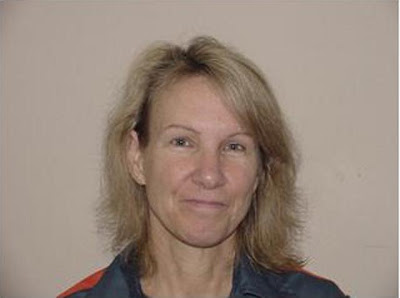 Plymouth, MI—Despite being subjected to a long and horrid trip in chains from San Diego to Plymouth on a prisoner bus this Soccer Mom can still muster a smile.

I don’t know too many women Walsh's age that can tolerate being photographed without having their hair done and without make up.

Walsh is preparing to make her case that she has been punished enough for that youthful drug commerce indiscretion as a teen 33 years ago in Saginaw, Michigan.

Walsh’s original sentence of 10 t0 20 years was off the charts of harshness for similar first time drug felons.

So far hundreds of citizens have called Governor Granholm and or signed petitions for Walsh’s speedy release.

Walsh’s husband and three children are struggling with this family disaster as best they can.

Right now Walsh is getting acquainted with her lawyers as they map out plans to prove Walsh has never re-offended in the 32 years she’s been a fugitive at the proper legal venues.

This ordeal is far from over. Many years and tears could pass before Walsh jumps all the hurdles to return to a life of wife and mother.
Posted by Paul Huebl Crimefile News at 5/14/2008 02:31:00 PM

to support Susan Lefevre and send a petition to Michigan Governot Jennifer Granhold to grant a commutation, please go to www.freesusanlefevre.com
Thank you