A New TV Series That My Readers Will Like, DEAD MAN’S GUN 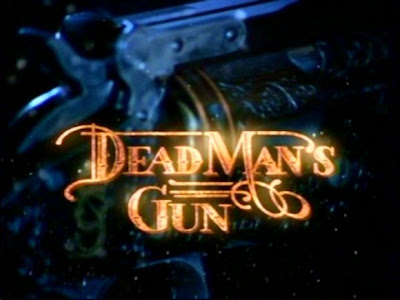 No, it’s not really new, I just discovered it.

The title is misleading and is less about guns and more about those things we don’t understand like the Twilight Zone brought us so long ago. Mystical justice, poetic justice and the human element are showcased in the series with superb changing cast members.

THE GUN
This 1997 series is woven around a 19th Century Smith & Wesson, Schofield .44 Russian revolver. The gun is indeed rare and refreshing to see in films when the Colt Single Action Army stole the show long ago in Hollywood.

The Schofield was remade in the 1990s by Smith & Wesson and copied well by gun makers, Uberti and Navy Arms. I suspect the one used in the show is a lightly engraved and gold inlayed Navy Arms offering. It’s really quite pretty.

The Ed and Howard Speilman creation somehow was buried away at least from me until it resurfaced on SHOWTIME. At least I enjoy it now when I watch very little TV, that’s thanks to my trusty TV DVR.

Kris Kristofferson narrates the series as good as it gets and I’m really fond of the fine casting and acting. The writing is first rate.

THE PLOT
The gun simply shows up in the beginning and winds up in a new owners possession by simple chance. The new owner is helped or cursed while in possession of the gun. The new owner finds his or her life changed. Predicting the direction of each story is nearly impossible.

The series was produced in Canada for two seasons. It now has seen its rebirth on cable and DVDs. Check it out, you’ll like it.
Posted by Paul Huebl Crimefile News at 5/21/2008 10:56:00 AM