TV News Sucks More Than Ever! 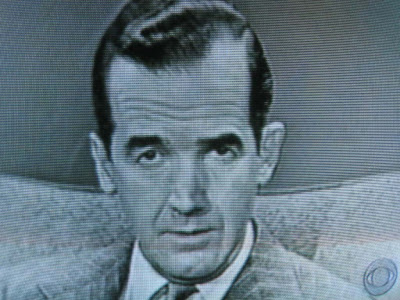 Ever since Edward R. Murrow hit the scene, TV news executives have not dared change their proven pattern of boring news presentation. That pattern survived through nearly 50 years as a time honored proven winner. A proven winner only if you have a captive audience with no real TV news alternatives.

Before the last decade or so we had only three TV channels all doing news on a Monkey See, Monkey Do format. With the cable explosion and now the Internet steadily drawing once loyal viewers away, the old ways need to change in a hurry.

If I was a general manager or news director with creative authority I would do it all so differently. Gone would be the trusted unchanging anchors. Instead reporters would assume those duties on a rotating basis from the newsroom instead of those sterile news sets. Messy reporter and producer’s desks are far more visual and interesting.

The attention span of today’s rapid-fire remote control viewers can’t tolerate the predictable old format anymore. I suspect if Murrow reappeared viewers would zap him back to his grave in an instant. Of course reporters doing stories out in the field have to continue to tell their stories pretty much the way they always have. Reporters and photographers must be encouraged to try new things.

The photographers need to lose their tripods but for press conferences and bring some excitement to their visuals. The viewers need to see the whole scene of these events both in front of and behind the cameras.

I’m not big on the VJ, system where a reporter becomes the photographer, producer, and sound man. However there is a place for those skilled players in every TV newsroom.

Clothing worn by reporters should match the stories and never be predictable.

TV news websites are getting better than ever. Court documents, police reports and such should be made available in their entirety on these well promoted sites.

The news outlet’s websites video embedded codes should be placed on all video packaged stories so the thousands of bloggers can be licensed to use them freely. This would give additional story life and revenue possibilities. The advantage here is a small ad clip goes with that story along full credit for the source.

Station General Managers and News Directors can change or they may find themselves working as Wal-Mart greeters. These are desperate times that call for radical experimentation.
Posted by Paul Huebl Crimefile News at 5/13/2008 11:21:00 PM

I look to the internet, first to the high availability and therefore massively competitive nature of the on-line "print" editions of traditional news services, but more so to blogs such as yours for my "news".

For the most part, the traditional news services no longer serve the public, and that's a development I suspect has the founding fathers thrashing in their graves. The provision for a "free press" was intended to keep the governments honest. But with advertising and the almighty dollar, commercial news caters to the lowest common denominator because that's what sells.

Forget TV and the commercialized news services. They report what sells, not what you need to know.

Turn to the net, to the blogs of individuals who "report" on what interests them. Yes, it's true there will sometimes be a bias, an opinion, a viewpoint. But isn't that what you're already getting from the printed newspaper and the televised six o'clock regulars?