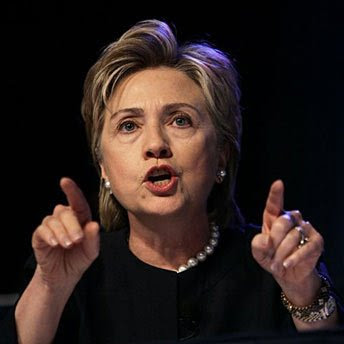 Today one would be president seemed to make a veiled threat against another contender for the Whitehouse. A nasty Democratic Primary campaign reached new levels when Mrs. Clinton suggested she should stay in the race like Robert Kennedy’s opponents did in 1968.

Mrs. Clinton’s remark makes the old time theater saying, “Break a leg” pale by comparison. Is this going to be a self-fulfilling prophecy?

On this blog I made a similar prediction because of the grim statistics that American presidents have more than a 10% chance of being assassinated while in office. I also pointed out that perhaps such an event is due because nearly 50 years has elapsed since Oswald killed JFK. Of course there were two attempts on Gerald Ford, one nearly killed Reagan. Then there were the candidate attacks, one crippling George Wallace and the killing of Robert Kennedy

Being a president or candidate is definitely dangerous despite the best efforts of the Secret Service. .

I think that a Black man with a 20 year ties to a racist like Reverend Jeremiah Wright, with few qualifications aside from his race and close ties to Chicago’s mob run city administration would make him a choice target for such extreme action.

In a country of nearly 300,000,000 people with a large percentage of them under the influence of drugs, legal and otherwise many more Oswald types must be lurking somewhere.
Posted by Paul Huebl Crimefile News at 5/23/2008 09:04:00 PM

Today one would be president seemed to make a veiled threat against another contender for the Whitehouse.

Hardly. At worst all she did was point out that Bobby was able to be murdered because he was still campaigning in June and thus that a June campaign is not that unusual.

Hillary's assassination prediction? I listened to her speech, and all I came away with was the fact that she was stating that Democratic party nominations weren't decided until as late as June on a number of previous occasions, such as Bobby Kennedy's lasting until June of 1968, as well as her husband Bill's not being decided until June. Sure, you could probably read anything you want into it, but that is a far reach. I dislike the woman more than the average voter after reading the book, Dereliction of Duty, by retired Air Force Lt. Col Robert Patterson(a great read, and an eye opener) but I saw nothing wrong with what she said.

Mrs. Clinton should be smart enough to know that the Obama people will take anything she says and play the race card or anything they can dream up.

Mrs. Clinton's remark was dumb and divided the far Left Wing of the Democratic Party. Keep up the good work!