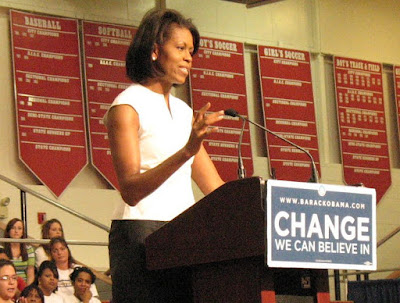 I have two words to say about that, “Or what?” Obama is desperately trying to keep covered Michelle Obama’s quid pro quo position with Chicago’s taxpayer funded University of Chicago Hospitals.

Mrs. Obama is deeply entrenched with Richard M. Daley in Edward M. Burke’s Chicago corruption cabal. We can expect to learn exactly why Mrs. Obama ‘s salary at the hospital was raised suddenly from $100,000.00 to $300,000.00.

It’s too late Obama there will be volumes said about your wife. It’s open season on her and of course you. If you can’t handle that perhaps you should quit.

The sad truth this presidential campaign has been nothing but a beauty contest for ethical pygmies.