Predictably Primary Election Has Been Reduced To Race. 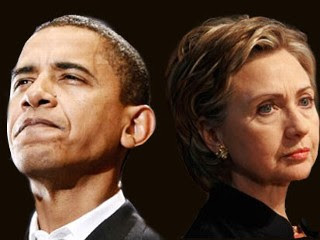 I did not expect American Blacks to vote for any candidates of a different skin color in a million years. Obama’s pastor did a really fine job of dividing the races.

I see the usual Black precincts of Lake County Indiana are last to be counted. Of course I’m convinced they’re busy as usual stuffing those ballot boxes for their favorite color of candidate.

Hillary vowed to work herself to death helping Obama should he become the party’s standard bearer. We can only hope Clinton was telling the truth! Really I’m hoping that that these contenders hate each other enough not be on the same slate ever.

Now I’d like to help the Democrats and suggest that the Democratic VP choice be Al Sharpton!

The Democratic Primary race is somewhat like watching the infamous and extreme Bumfights video of several years ago.

As for November it will be just another lackluster General Election between politicians uniquely unfit and unqualified to run this country.
Posted by Paul Huebl Crimefile News at 5/06/2008 10:28:00 PM