Illinois Gov. Blagojevich Has Yet Another Taxpayer Joyride Plan 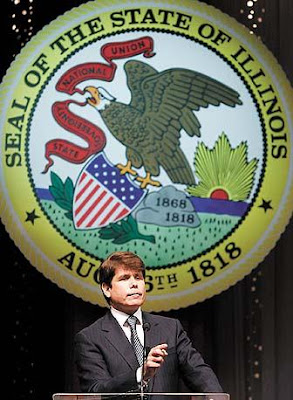 That reminds me of the time Chicago politicians gave a mere, one million dollars to Jeff Fort, head of the Blackstone Rangers aka The P Stone Nation and finally the El Rukins. Needless to say the politicians only funded the largest gang bloodbath in Chicago’s history. Just imagine what $159 million could do?

Highlights of what Blagojevich wants:
$20 Million for summer meaningless make-work jobs for idle youth, after school hip-hop, basketball and vocational training programs are the plan. Of course they left out any Bill Cosby style programs to change the basic ghetto culture of gangs, drugs and killing.

$50 Million will be given away to fix up or acquire real estate in certain communities. The good news here is Blagojevich can only hand out $50 million to his cronies. That should bring in plenty of kick-backs for those expensive political campaigns.

$40 million in grants to establish a loan program for job-producing small businesses or community organizations. I guess the gangs need their share too!

$10 Million will be used to buy needed equipment. I never knew body bags were so expensive!

The only hope for Black Inner-city kids is to drag them into the White man’s world of the American dream. Medicine, commerce, art, entertainment, and manufacturing make many more millionaires than the ghetto methods.

Blagojevich wants to raid the pockets of hard working taxpayers who have already been bled dry. More productive small business that employs people will disappear because they will be unable to survive the increased tax burdens.

The inner-city Black culture needs to be snuffed out, not perpetuated with so much good money after bad.
Posted by Paul Huebl Crimefile News at 5/06/2008 06:27:00 AM

>>>>drag them into the White man’s world of the American dream. Medicine, commerce, art, entertainment, and manufacturing make many more millionaires than the ghetto methods.<<<<

THe problem is we don't have that in Chicago. There are NO jobs here!!!!!!!

Rene,
Educated people create their own jobs by starting businesses. Of course Chicago is unfriendly to businesses by regulating and taxing them to death. Nobody in their right mind would start a business or keep one in Chicago. Chicago will never heal under the crooked regime of Daly and Burke.

The voters of Chicago need what they don’t have, education.

Blagojevich just got done rewarding his cronies in the legislature who voted "no" for the recall bill, which would have allowed the voters to give him a much needed boot in the ass and get him out of office. Now he is probably rewarding more of his buddies with this ridiculous idea. Didn't he threaten to lay off about 2/3 of the Illinois State Police sworn officers due to lack of money in the budget a few months ago? Oh wait, that was just another one of his silly political games that he loves to play. What an idiot!