Obama Just Threw His Own Church Of 20 Years Under The Campaign Bus. 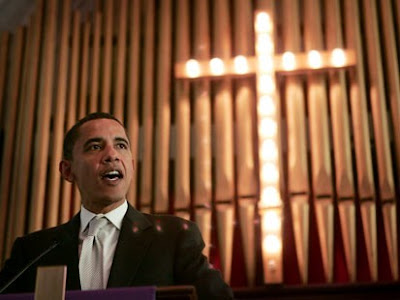 Barack Obama moments ago resigned his membership with Trinity United Church of Christ in Chicago, where Jeremiah Wright was formerly pastor and a Catholic priest mocked Hillary Clinton.

The Democratic Primary fight has been so much fun! Mrs. Clinton’s forces has done so much to help us all know more about Barak Obama then anyone wanted.

As Obama’s friends and associates have come out to help him he’s disavowed them one by one. Far too many radicals, bombers, racists and assorted crooks have fallen all over themselves trying to get their friend and confidant elected. The more help Obama gets the more his amazing campaign flounders over redundant gaffes.

Obama has not yet seen how he will be tarred with the brush of the criminal Chicago political organization that he was spawned from. That will come from both Republicans along with Obama’s disowned and now disgruntled pals.
Posted by Paul Huebl Crimefile News at 5/31/2008 03:54:00 PM

Thmells like his initials B.O. - and his "Act" that he's not happy with hois Rev Wright and his Church is just that, and "act" until he thinks he can get his B.S. ass into the White house. WE ARE WISE TO YOU MR. B.O. YOU LIE LIKE A RUG!