The Republican Party Has Lost Its Way In America 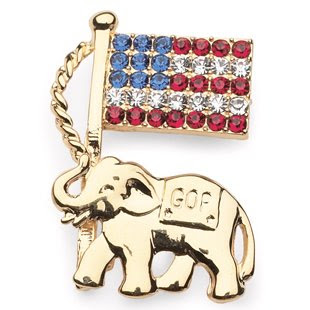 Before the GOP was firm in their stand on taxes, over-regulation, crime, rewarding productive Americans, and keeping government small. Not anymore.

Today Republican leadership has allowed and encouraged Mexico to export poverty, drugs and crime here with their actions on legislation and enforcement. They have gleefully joined in the over-regulation and over-spending ways of extremist Liberals.

The candidates offered up as presidential candidates were as bad as it gets. Ron Paul offered some hope but his age and lack of name recognition did him in early.

We have qualified Republicans in Congress like Arizona’s John Shadegg. Shadegg has a stellar reputation for honesty, electability and real charisma. The present Republican leadership is controlled by party infiltrators and interlopers with non-Republican agendas.

This election brought us candidates from every direction that have a very foul odor about them. I can’t imagine why in Hell we can’t do better.
Posted by Paul Huebl Crimefile News at 5/15/2008 10:42:00 AM