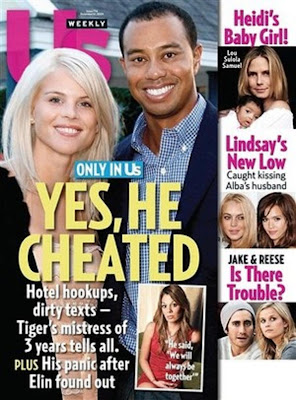 So far Tiger Woods have been linked to at least eleven women (the is growing fast) as his bed mates. It is interesting to see that Tiger Woods rejects African-American Women. Is Woods a racist? Aren’t African-American worthy of a roll in the hay with the legendary golfer?

Perhaps Woods would be more suitable as a pitchman for condoms, stripper bars or sex toys. I suspect that one by one Woods will be rejected by the current manufacturers that liked his former squeaky-clean image.

Woods has enough money at his young age to survive that horrible economy, the destruction of the American dollar and Barack Obama’s Communist revolution. So getting dumped from his current product endorsements won’t hurt him a bit.

Woods never has to touch another golf club either. I suspect in the old days Woods would have been expelled from every golfing organization and match over his personal conduct. We live in different times today and I see a Nobel Peace Prize in Woods’ future.
Posted by Paul Huebl Crimefile News at 12/08/2009 06:38:00 AM

Email ThisBlogThis!Share to TwitterShare to FacebookShare to Pinterest
Labels: Woods

Paul I'm not surprised.
That's why you'll never see me wearing sports paraphanelia and/or watching sports. What a waste of time, money and energy.
You and I spend our time more wisely than most, doing things that really matter.

She needs to abstain from him, divorce him and take him to the cleaners.

Then get AIDS tests over the next 12 months.