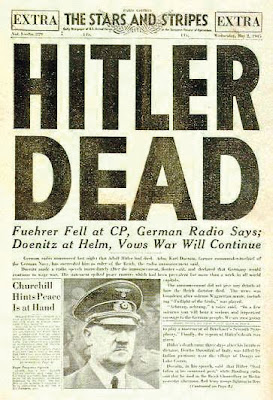 Berlin, Germany—When I was visiting Berlin last month the realization of Hitler’s escape seemed more logical and believable than that old suicide story.

Adolph Hitler back then was 56 years-old and had access to untold wealth. He could easily have placed funds, gold and or diamonds in different places just in case of his forced exile.

There can be little doubt that Hitler knew all about the allied forces exact movements and the inevitable fall of Berlin.

Hitler’s self-preservation instincts and understandable desire to protect Eva Braun must have been a priority for him and those around him, who all swore an oath to their Fuhrer. I can’t possibly imagine that there were no plans for escape.

Hitler reportedly married Eva and dictated his last will and testament. The news came to Hitler that crowds had beaten Italian dictator Benito Mussolini and his sixteen year-old mistress to death and hanged their bodies by the heels.

The claim was that on April 30, 1945 as the Russians were assaulting the Reich Chancellery that Hitler and Eva committed suicide using both a pistol and a cyanide capsule. SS Sturmbannführer Otto Günsche and other Führerbunker occupants told of putting Germany’s First Couple in a bomb crater and cremated their bodies.

This story is just too convenient and back then there was no scientific way to prove the charred remains were that of Hitler and Braun.

The Russians collected the remains of the dead bunker inhabitants. Somewhat recently the skull believed to be that of Hitler, with a bullet hole was found to be that of young woman not of a man Hitler’s age. Remember, at the time there were plenty of corpses littering a war-torn Berlin that could have enabled this scenario.

Hitler could have shaven off that silly little mustache. Eva could have turned herself into a brunette and they could have left the Führerbunker far in advance of the Red Army’s final Berlin assault.

Hitler had absolute control of all the passports he wanted from Germany as well the nations he once occupied. He certainly had control of any and all fingerprint identification files in existence too.

I have little doubt that Hitler survived and escaped. Perhaps he and Eva lived out their lives somewhere in a Swiss Villa as a wealthy, young retired couple. I doubt that anyone had the actual fingerprints of Hitler or Braun to compare.

Hitler was well photographed and his face was well known worldwide but a simple change in hair style and perhaps a goatee beard would have rendered him unrecognizable.

Email ThisBlogThis!Share to TwitterShare to FacebookShare to Pinterest
Labels: Hitler

I think that it is possible, especially since those human remains weren't found to be his. Hitler was a very intelligent and devious man so I wouldn't put anything past him.

I don't believe a megalomaniac such as Adolf Hitler would have been capable of living out his life quietly without attracting attention. His belief in his own superiority would've precluded his remaining obscure and hidden for anything more than a few days, much less years or decades.

Given his personality, if he did escape, he didn't survive for long. He would've ended up on someone's stage, clamoring for attention, if he had survived.

An interesting theory but I believe Hitler did commit suicide at the end of the war.

As for the Germans what awesome-sounding ranks they have. What is a Sturmbannfuhrer?

I think the Mossad would have found them.

The Mossad is way overrated as an investigative outfit. They are marginal at best buying information or misinformation rather than developing it.

The same is true for Nazi Hunter Simon Weisenthal who obstructed the Eichman investigation through gross incompetence. Dr. Josef Menglea and Martin Bormann both escaped decades of being hunted.
Also remember that they had no fingerprints, DNA or computers to aid in the search. Paid informants can only tell the fact that they actually know.

The war criminals arrested and tried at the end of the war all surrendered or did not attempt to go into hiding.

Hermann Goring drove himself and family to American forces while dressed in full uniform. I think he was in denial that they’d actually want to hang him. Near the end of the war Hitler ordered the execution of Goring and Himmler. Goring somehow must have thought that made him a “good guy” in the eyes of the Allies.

I suspect that it would be easier to catch these guys today with technology advances. They'd need a fresher trail than nearly seven decades though.

Sturmbannführer is a group leader. It is a rank of sorts.