Maricopa County Arizona Is At War, With Itself 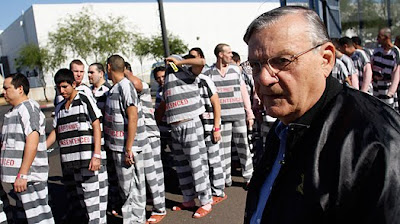 Phoenix, AZ—Local politicians and judges in this town have always worked, played and engaged in corruption so well together. They have always protected each other but things are different now.

Maricopa County Attorney Andrew Thomas and Sheriff Joe Arpaio have taken on the rest of the county government like attack dogs. The lawyers, private investigators and bail bondsmen are in for a Christmas bonanza.

If Sheriff Joe has his way most local politicians and even some judges will be wearing pink underwear and living in his Durango tents.

County Supervisors Mary Rose Wilcox and Don Stapley have been scratching each other’s backs for years. Now they are both facing prison for corruption charges. Perhaps they can rat out some of the others enabling taxpayers to get a break!

At the heart of the matter are two law enforcement officials going after their critics with raids and SWAT teams. Investigations are being opened everyday against judges and politicians who have gotten on the wrong side of Thomas and Arpaio.

The good news here is that it’s no longer business as usual as every contract and every shady deal is getting close examination. These deals are the real reason Arizona is broke. The unneeded light rail project and every kind of government building contract have funded political campaigns like never before.

I’m loving this war, if for no other reason it will slow down the corruption. Perhaps this will help limit the time politicians hold office.

It’s also time to end these lifetime judicial appointments too. Six years as a judge is enough for any lawyer. The judges would be a lot more reasonable if they knew they’d be back practicing law soon.

I only hope this war escalates spreading everywhere cleaning up government.
Posted by Paul Huebl Crimefile News at 12/09/2009 12:56:00 PM