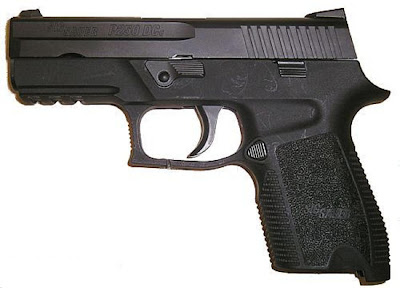 ABC News has suggested that Sig Arms has endangered the nation by revealing that the Air Marshall’s service pistol is now the P 250 Compact in .357 Sig.

Their sensational claim is that the bad guys could somehow benefit from this information.

All semi-automatic handguns operate in similar fashion and law enforcement stopped using revolvers long ago. There are no secrets about these semi-automatic firearms that have not changed much in nearly 100 years!

This knowledge is nothing special and releasing it in no way places anyone in harm’s way. This will however cause silly people who don’t know better to wring their hands because the “experts” at ABC news did this story.

As for the weapon and caliber chosen, I’d have rather picked the .45 ACP version but have no problem since the Air Marshall’s ranks include metrosexuals and women that might find the more powerful caliber intimidating.

I can’t imagine why they chose the double action only option. That reduces the ability of user of this weapon to quickly and accurately fire shots. Many timid police administrators feel this reduces liability of an accidental shooting. I guess they’d rather endanger their sky cops rather than train them.

First of all, I'd like to know why the Air Marshalls needed to go to a new pistol. What was wrong with the 229? And how does publishing this story violate any opsec measures the Air Marshalls may have? And lastly, why the constant hammer of any pistol round other than the 45 ACP? You know as well as I that it's all about shot placement,not caliber. The 357 Sig is a well respected round and in those places where it's been approved such as in the Texas DPS, it's ben shown to be a better round than your highly exalted 45. Me? I carry a 9mm. And it's worked out just fine for me in the couple of times I had to use it.

Why the choice in DAO is beyond me.Air marshall duty is "tube fighting" so you need to be precise and quick.DOA puts you behind the eightball,its a system for Chiefs who are afraid of their own poorly trained officers.

Why .357 Sig round,if it fails to expand it will act like a hot loaded IPSC .38 Super Fmj round.Expansion is a sometimes thing on the street.

I would equip and train them with a high quality 1911a1 in .45 Acp.This would flatten any fanatical towel head.

I agree re shot placement. Although Paul knew that.

This metro sexual will gladly take you into the mat room. After I smack you around I'll let you borrow my hair gel. 90% of Air Marshal come from local PDs and/or the military.