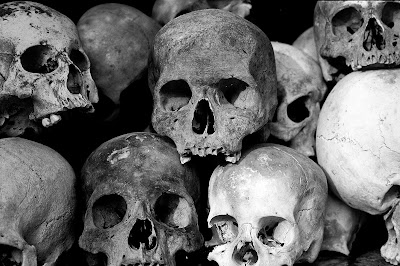 When the word holocaust is used most Americans think only of the six million murdered under National Socialism by Adolph Hitler’s Third Reich. Yes, that was a monstrous event of extreme hatred and cruelty.

At the same time Americans simply fail or refuse to recognize the hundreds of millions of people murdered under all the other Socialist flags.

It was the Socialists and Communists in our own country and government that enabled and facilitated the Killing Fields of Pol Pot. The real war criminals were those Americans that wanted the Communists to control South Viet Nam.

Stalin, Mao, Castro, and Pot, have led the way in mass murders. They were followed by so many other lesser publicized Socialist nations. Socialists know only one way to deal with dissent and those that want out of their utopia. That is to murder those who they can’t convince to accept this failure of a government plan.

It’s apparently alright to simply not recognize the killing fields of Pol Pot, the endless purges of Stalin, Mao and Castro like they don’t exist.

If you find the photograph above disturbing that may well be you and your family under Socialism.

You hit the nail on the head. Socialism kills. If this horrible health care reform bill is passed then this is going to result in the deaths of many Americans that could have been avoided. This bill needs to be flushed down the tiolet because its a load of crap.

Where did you get the number of 6 million. That's about 1/3 of the victims