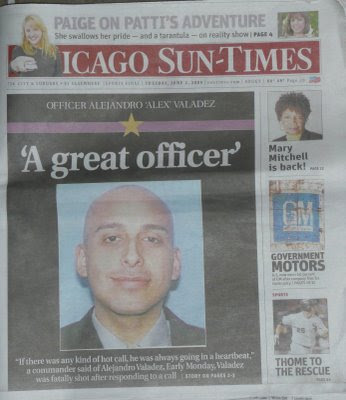 Chicago, IL—They did it again. Illinois’ political imbeciles ignored the constitution and enacted yet another unenforceable gun law. Of course they had to pass the new law on the back of some poster child victim and this time it’s murdered Chicago police officer, Alejandro Valadez.

It was bad enough for the young cop to be murdered but to then use him for political gain is an outrage.

The law seems simple enough on its face, enhanced prison time for a “known gang member” caught with a loaded gun.

The problems are twofold. One is that Americans have a right to belong to whatever groups they want and that’s protected by our First Amendment. Secondly possession of firearms is an individual right all Americans enjoy unless they have forfeited that right by possession of the weapon after they’ve been convicted of a felony.

There is already a federal law that calls for a ten year prison term for convicted felons and a concurrent state law that calls for five. Those laws are rarely enforced and those involved in crimes use the laws for plea bargain leverage.

They threw a victim party so the politicians included a pathetic State’s Attorney, Anita Alvarez and Mayor Richard M. Daley so they could get some face time before the TV cameras.

I can only wonder how these jerks could keep a straight face while they praised this new law pretending like it’s a new tool to fight gang violence when they know better.

I don’t know too many responsible Chicago gun owners that belong to gangs. The guns may be banned in Chicago but most owners are law abiding, since the gun bans are nothing more than outlaw infringements and a violation of the owner’s civil rights.

I guess this must be filed under political propaganda, wasted tax dollars and a way for the ignorant to feel good.

We don't need more laws. We just need to enforce the ones we already have.

Anita Alvarez claims that it's an easy matter to identify gang members: standing on the street throwing signs, wearing gang colors, etc. She's clueless and out of touch with the US Constitution. This law will go the way of Chicago's Gang Loitering ordinance.

Shamefully, the politicians are preying on the grief of the slain officer's family and friends.

If Daley is so Hell bent on “taking guns out of our society,” and doesn’t see a need for a law abiding citizen to exercise his God given right to self defense, why doesn’t he lead by example and eliminate his family’s armed CPD security detail and disarm the rest of the Chicago politicians?

Unless of course, he thinks their families are more valuable than ours.

Anita Alvarez is a tool. She took an oath to defend the US Constitution, yet she blatantly refuses to abide by the 2nd Amendment. She apparently knows better what's good for the people of Crook County. Personally, I think that whenever someone holding an elected office who takes the oath to uphold the Constitution, then is found to NOT abide by it, should forfeit that office immediately. If this happened, a whole slew of politicians would be out of office tomorrow, namely Daley, Alvarez, Obama, Holder and dozens more.