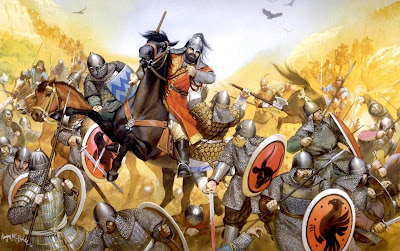 It was indeed long ago that Christian soldiers were sent to cleanse the earth of Muslims. It cost untold lives on both sides of every battle.

Now radical Muslims are at war with the United States and Western Europe. Their attack that September 11th day is not out of our minds or hearts. We have moved on but we keep getting brought back by recent terror attacks. Fort Hood and now that Detroit bound full airliner have become fresh reminders.

Islam has left deep wounds in America. Many Americans have grown to hate Muslims over their terrorist acts. Muslims may find themselves on the endangered species list if they continue. There is serious Muslim problem and it better cease before numerous nations band together for a FINAL SOLUTION TO THE MUSLIM PROBLEM.
Posted by Paul Huebl Crimefile News at 12/27/2009 07:13:00 PM

The muzzies are not going to conquer the world by guns and bombs. The smart ones, the playmakers know that. They are going to do it from within. Record numbers of births which means a lopsided population ratio in their favor, CAIR spreading their nonsense via the MSM, establishing muzzie ghettos which grow larger and larger every year, more mosques and finally and most importantly, the stupidity of the average western citizen.That same citizen who is afraid to say anything or do anything because it is not politically correct. THAT is whats going to destroy us.
The average American or European citizen thinks that the war AGAINST us is over now, that the muzzies do not represent a threat to us now that George Bush is gone and that the average muzzie simpy wants to coexist. In their mindset, things like this most recent attempt to blow up an airliner, Ft. Hood and all the other muslim attacks are nothing more than acts by criminals. They can't see that it's a concerted effort to destroy all of us. They will refuse to believe it up until the very moment the sword begins to slice their neck.

Put them in internment camps like we did to the japanese til we can sort things out.

December 28, 2009 6:09 AM poster has it exactly right. The muslims are multiplying their numbers by having many children while the anglo peoples are not having enough children to even keep their numbers level. The only hope in the United States is the hispanics, who are procreating at a faster rate then the muslims. Once the muslims have a majority population they will get themselves elected to public office and then change laws to their benefit. Don't be surprised when you are living under sharia law within a few short decades unless we wake up and stop this trend.

The demographic observations made here are just as valid when applied to non-whites in general. Regarding the "danger" posed by Muslims to America -- illegal immigrants from Latin America have murdered many more Americans than Muslims ever have. Hispanics, legal or not, are not a "hope" -- US whites can only expect to live in Third-World conditions when non-whites become the majority here.