“The Public Was Never In Any Danger.” 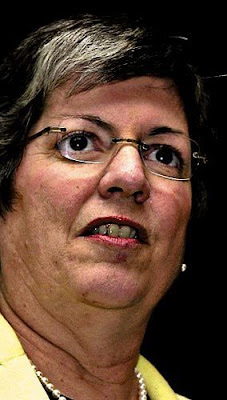 Washington, D.C.— That quote is a favorite of a long time Sacramento news anchor and my friend, Dale Schornack. This is always the first statement made by government propagandists after a dangerous or threatening event.

Of course our own government bureaucrats always follow the Goebbels formula when their own performance is on the ropes. Homeland Security Secretary, Janet Napolitano also learned from the Goebbels’ model when she faced the media over the bombing attempt on the Amsterdam to Detroit flight last week.

Napolitano proclaimed that, “The system worked.” She of course dared to suggest that the public was never in any danger. Today we know a heroic Dutch passenger, not a government agent saved the lives of countless people both in the plane and on the ground. In this case the government failed in a huge way by not heeding the dire warnings of the suicide bomber’s own father.

Today, the former Arizona governor is reversing her earlier proclamation. Now she is going to do the next best thing, draw up new torture plans for paying passengers. Aggravating passengers gives the public the illusion of security and Napolitano believes she must put on some sort of show.

Someone please explain why we have a Homeland Security Secretary with zero experience or training as a cop? Napolitano is no more than a bad example of the political patronage system.

All the TSA has to show for a decade is that some people like former Chicago cop and now actor, Dennis Farina will occasionally forget they had a weapon in some bag they inadvertently carry onto a plane. The TSA commended itself over the Farina arrest like they just apprehended Usama Bin Ladin. Farina was eventually cleared of any criminal stain.

The TSA is nothing more than a jobs program gone wrong. Police uniforms and gold badges on TSA workers are nothing more than pretend costumes. They are not screened, educated or trained as real law enforcement officers. They are simply part of an elaborate illusion fooling some gullible airline passengers and taxpayers.

The TSA knows that they can’t keep bombs and weapons from being smuggled on to planes. Any maximum security prison warden can tell you it’s impossible to keep deadly weapons away from inmates. Bringing weapons or bombs onto airplanes is no serious challenge for someone who wants to do that.

The only system that has any promise of reducing this threat is criminal profiling.
Posted by Paul Huebl Crimefile News at 12/28/2009 07:31:00 AM

Paul, you must go to our blog and read the rantings of a TSA agent who lives on the westside. It's hilarious. He/she actually thinks they are the police and berates us because we can't carry a gun on an airplane. It would all be so very funny if the ranter were not serious and didn't believe his/her own nonsense.

Lady is a long time Concealed Carry. Been to training courses hither and yon.

Preparing to fly to Phoenix to meet with husband who drove down, she locks her bedside gun, desk gun and purse gun in the safe. Goes to the airport.

There is some sort of mixup with the guy in front of her at the TSA X-Ray. They run his stuff through several times, then the ladies purse.

The TSA agent says "Something looks weird but I guess it's OK."

Upon arrival at the hotel in Phoenix husband goes to put pistol he drove down with into wife's purse and finds full magazine of 9mm's!

And we're supposed to trust TSA to keep our airlines safe???

to 8:11 would love to read the comments what is the blog site?

I’m s TSA security officer and I take my job seriously. The threat of older white guys like you is far worse than Muslims. You don’t have a clue how we are treated by passenger like you that hate us. It’s not our fault that the TSA won’t train us more or let us carry guns. We stopped many hijackings by taking guns away from guys like Dennis Farina. How do you know what his intentions were? He could have killed thousands.

The terrorist is lucky that, that BULLdyke Napolitano wasn't on the plane. She would have had her way with him and ate him for dessert.

I like the Kid From Brooklyn's take on all this, seriously. Give everyone on board a Louisville Slugger. Anyone who starts something (including someone with a bat) would be beaten down quick.

Imagine how 911 would have turned out if the passengers on the planes that were hijacked all had baseball bats! The terrorists would have had 'em shoved where the sun doesn't shine!

Anonymous said...
I’m s TSA security officer and I take my job seriously. The threat of older white guys like you is far worse than Muslims. You don’t have a clue how we are treated by passenger like you that hate us. It’s not our fault that the TSA won’t train us more or let us carry guns. We stopped many hijackings by taking guns away from guys like Dennis Farina. How do you know what his intentions were? He could have killed thousands.


"We stopped many hijackings by taking guns away from guys like Dennis Farina".


That line tells the whole story!

That is why TSA is such a miserable failure and people HATE you. None of you use COMMON SENSE! Youy could Never be a Law Enforcement Officer, no brains!