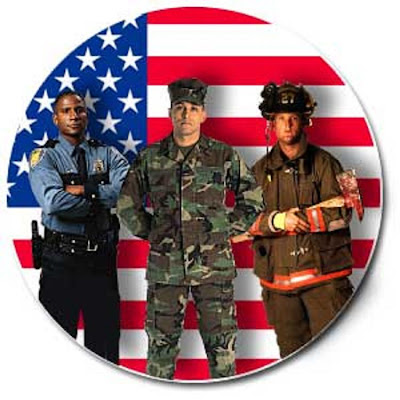 Just who are the first responders? If you think it’s those guys in the picture your dead wrong! They simply come and clean up the mess. They are, except in rare circumstances, glorified garbage men and nothing more.

Acts of violent crime or terrorism can be stopped cold. Not by government since there is never a cop when or where you need one. The first responders at every unthinkable event are everyday citizens. When the authorities are not there the citizen becomes the authority by default. What duties do we have?

As humans we all have a duty despite handwringing cries from those who won’t face up to their responsibilities. Evading that responsibility is both contagious and dangerous. Resistance to violence has been redundantly proven to saves lives. Of course age, ability and training is no small part of this equation.

Our creator gave us three gifts. The first one was fear and the second is the instinct for survival. The third is the ability to make tools such as firearms and other weapons. Using those tools to fight for your life dramatically improves survival.

No government has the right to restrict either self-defense, defense of third persons or the possession or use of the tools to do so. Governments make a habit of substituting their raw power over the gifts of our creators. Genocide and mass murder is never the act of citizens but that of governments.

Are governments or citizens more trustworthy to possess weapons? Governments have been proven by history to be ruthless and homicidal. Citizens on the other hand seem to solve their own problems without making mass graves.

As for our duty of citizens, governments like to eliminate everything except informing on our neighbors.

Citizens must learn about the tools of self-defense and use them. Firearms safety, defensive tactics, the proper justification of the use of deadly force must be learned. We must also learn the laws where we work and live that allow the judicious of deadly force. If the laws are defective or infringe on our rights and duties we must change them.
Posted by Paul Huebl Crimefile News at 12/27/2009 01:55:00 PM

Email ThisBlogThis!Share to TwitterShare to FacebookShare to Pinterest
Labels: self defense, terrorism

In my firearms courses as well as my counter terrorism PowerPoint presentations/speaking engagements, I invoke my own below definition for what a first responder is.

Paul I mourn at the videos and screams of all those kids at Columbine school.

Many of them were slaughtered as the police stood outside waiting for SWAT; as they listened to many of those gunshots inside.

Tell those victims families that their kids weren't the first respondeds.
Watch those videos on Youtube, it is horrific knowing that officers listened to many of those shots and screams but did nothing.

It took the LEOs five hours -- five hours to send in a robot after the Barona Gaming Commission shooting yesterday to see that everyone was dead.

Did they get distracted by the slots or what?

Somethin' fishy is goin' on down in San Diego county out in Lakeside.

Yesterday, a recently fired gaming commission employee walked into work about 10:30AM with a shotgun, told the secretaries to leave. Three shots were heard shortly thereafter.

Four hours later, a Police robot rolls into the room and two dead bodies are seen. The Police enter and, 30 minutes later, announce that the "stand-off" is ended.

During those four hours Police said they were attempting to contact the assailant but were unsuccessful.

I'm going to revise a well-known expression to, "When seconds count, the Police are waiting outside -- for four hours."

I wonder how long it took the victim to bleed out? (For the sake of his suffering, I hope it wasn't 3.9 hours.)

Regardless, the gaming commission has released a press statement stating, "we want to express our deep gratitude to the Barona Security Department, the San Diego Sheriff's Department, the California Highway Patrol, Barona Tribal Enforcement and the Barona Fire Department for their quick response."

Guess they got there fast. And then waited.

A parking lot and the commission were closed during the incident but, thank goodness, the casino remained open the whole time.

(Is that where the cops went?)

See also http://www.kpbs.org/news/2009/dec/29/gunman-opens-fire-barona/ for the above details.